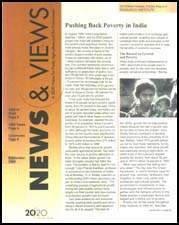 To release a comprehensive report on the ongoing "Livestock Revolution" in food and agriculture, the 2020 Vision initiative held a panel discussion on June 1 in Washington, D.C. The panel featured several of the coauthors of the report, along with Lester Brown, president of Worldwatch Institute; Hank Fitzhugh, director general of the International Livestock Research Institute; Gary Valen, director of sustainable agriculture for the Humane Society of the United States; and Montague Yudelman, senior fellow at the World Wildlife Fund. The panelists focused on the enormous transformations that are taking place in developing-country patterns of consumption of livestock products as incomes rise, populations grow, and urbanization increases. Chris Delgado, one of the coauthors of the report, set the theme for the discussion by noting that the rising consumption of meat and milk presents a "potential for triumph, but also the potential for disaster," depending on the policy response to the changes that are emerging.

From the early 1970s to the mid-1990s, the volume of meat consumed in developing countries grew almost three times as much as it did in the developed countries. In the next two decades the annual growth rate of developing-country meat consumption is expected to be four times greater than the developed-country rate. In Livestock to 2020: The Next Food Revolution, 2020 Discussion Paper 28, a collaborative effort between IFPRI, the Food and Agriculture Organization of the United Nations, and the International Livestock Research Institute, Christopher Delgado, Mark Rosegrant, Henning Steinfeld, Simeon Ehui, and Claude Courbois argue that the revolution is here to stay and if handled properly the changes in the diets of billions of people could significantly improve the well-being of many rural poor. But without long-run policies and investments to help meet consumer demand, improve nutrition, direct income growth opportunities to those who need them most, and alleviate environmental and public health stress, much could go wrong as well. 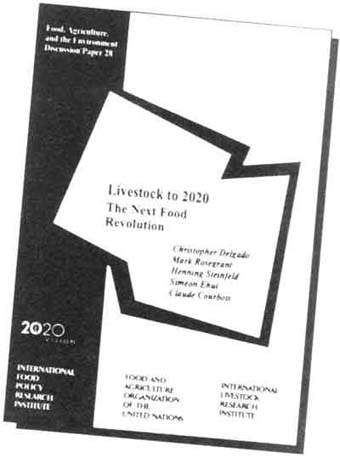 Livestock production could well become a key means of alleviating poverty in the next 20 years, the authors argue. But rapid industrialization of production could harm this major mechanism of income and asset generation for the poor. Policymakers should eliminate subsidies to large-scale producers to avoid driving the poor out of the one growing market in which they are presently competitive.

Livestock products also benefit the poor by alleviating the protein and micronutrient deficiencies prevalent in developing countries more efficiently than vegetables and cereals. At the low levels of calories consumed by the poor, lack of access to animal products, not overconsumption, should be the concern of policymakers.

The effects of the Livestock Revolution on the environment are potentially worrisome, but mainly owing to the pollution caused by large industrial systems of production.

Finally, the authors find that the increase in livestock production will require significant additional amounts of feed by 2020, but cereal prices will not rise in real terms as a result.

Lack of appropriate policy action will not stop the Livestock Revolution, but it will ensure that the form it takes is less favorable for growth, poverty alleviation, and sustainability in developing countries.