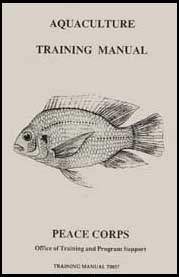 The training program which is described in this manual represents nearly 25 years of development. The Peace Corps Aquaculture Training Program has been evolving since training began in 1966. The basic training model was developed originally by Dr. Howard Clemens at the University of Oklahoma and has been modified over time, constantly being adapted to various training styles and circumstances, as well as to the needs expressed by field staff. Revisions have also been made based upon feedback from trainees, Volunteers, training staff and Peace Corps field staff.

Early training programs at the University of Oklahoma consisted of a single program per year, or every other year, for small groups destined for 1 or 2 countries. Between 1966 and 1974, it is estimated that 150 trainees destined for 6 countries were trained at Oklahoma. However, by the late 1970's Peace Corps' aquaculture programs had grown such that larger groups were being trained in multiple cycles each year. From 1978 through 1986, excluding 1983, nearly 800 trainees destined for 18 countries participated in training at Oklahoma. In addition, during the 1970's several countries conducted in-country technical training programs which were modeled after the Oklahoma program for approximately 200 additional trainees. From 1987 - 1989, 350 trainees bound for 20 countries participated in a stateside training program which was conducted by the University of South Carolina using a much improved version of the Oklahoma model.

In total, from 1966 - 1989, nearly 1500 Peace Corps Aquaculture Volunteers were trained using the basic "Clemens Model" which has been widely recognized as one the most effective, if not the most effective, training models which Peace Corps has utilized. The model has been controversial and has received some negative criticism. It has, however, consistently received very high marks from participants, other Volunteers, Peace Corps staff, host-country agency officials and, most importantly, the farmers with whom the Volunteers work on how well it prepares Volunteers for service both technically and non-technically. Other models have been tried by various Peace Corps countries and contractors with varying degrees of success but none have proven to be as effective as the "Clemens Model".

The Peace Corps Aquaculture Training Manual represents a combination of two separate but complimentary training manuals. The first is Guide to Peace Corps Fish Culture Training which was prepared in 1987 by Dr. Bill Shelton, Project Director, and Master Trainers, Ana Hiott and Eileen O'Hara at the University of Oklahoma. The Oklahoma manual was the first attempt to document the training program that prepared the vast majority of Peace Corps Aquaculture Volunteers for their assignments. The second is Peace Corps Fish Culture Training Design Manual which was prepared in 1990 by Roger Palm, Project Director, and Fran Lowell, Training Director, at the University of South Carolina. The vast majority of the current manual comes from the South Carolina manual. However, throughout the South Carolina manual reference is made to the Oklahoma manual. Therefore, during the editing process, I incorporated various portions of the Oklahoma manual. I believe this manual provides a reasonable representation of the aquaculture training program that has developed over the past 25 years. Copies of the original Oklahoma and South Carolina manuals are available through the I.C.E. resource center.

The premise for the development of this manual was to provide a basis for future Peace Corps Aquaculture Training Programs. In this way the quality of training would, hopefully, be preserved. This manual is intended to serve as the basis of Peace Corps Aquaculture Training Programs. The manual is not intended for distribution to trainees, but rather to serve as a resource for training program staff as they design their programs. New training programs (stateside, regional or incountry) will have to develop their own designs, or at least make modifications to the designs presented in this manual to reflect current program needs and the skills of the training staff.