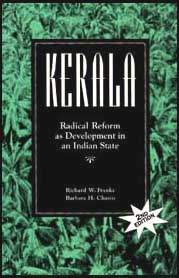 Despite limitations and failures, Kerala's development experiment has achieved many unusual, nearly unique levels of basic health, education, and social justice in the third world (indicated in tables 1, 2, and 3). How did Kerala's people do it? The explanation is complex and still widely debated by outsiders and within Kerala's own substantial scientific community. We believe the main factors can be identified, however, and put into three groups: ecology, history, and people's movements. All these factors influence each other and cannot easily be separated. We shall examine each of them briefly and try to explain the connections.

Kerala's basic physical and geological characteristics help account in part for the state's unique ability to deliver public services. As stated earlier, this narrow strip of land is bounded on the east by the Western Ghat Mountains. Most of the state receives large amounts of rainfall, so water has not been a major problem.

The combination of a rich and fairly evenly distributed set of resources has partly led to Kerala's settlement pattern (unique for India) of having its people relatively evenly dispersed across the land. Because of this, Kerala does not suffer a very large rural-urban distinction. Cities and towns gradually merge into villages, which are themselves not highly differentiated from each other. As one Kerala economist has put it, "Villages are not clusters of houses but a continuum of houses littered all over the landscape."23 This even dispersion of people seems almost certainly caused in large part by the lushness of the country, the availability of garden lands for each house site, and the relative ease of getting water, which is in many other parts of India a serious and difficult problem.24

Because of the dense and fairly even population distribution, it is simply easier and more cost-effective to provide health and educational services in Kerala than in other parts of India. This helps to account for the near equality in quality of life indicators between rural and urban Keralites (see table 2). Indeed, it is almost certainly the general case that in densely populated areas-such as cities or the high-concentration wet-rice farming areas found in much of Asia-delivery of modern services is easier. This may help to explain the generally higher level of development in densely populated Asian countries than in, say, most African nations where port or capital cities contrast strikingly with the sparsely populated surrounding countryside requiring large investments to connect villages to regional centers with roads and to provide schools, health centers, and the like. In many African countries as well, large areas are inhabited by nomadic peoples whose itinerant life styles make the delivery of health and education even more difficult and costly.

Kerala has been a major international trading center for hundreds-possibly thousands-of years. The region's cardamom and cinnamon are thought to have been exchanged with ancient Babylonia (Sumer) as early as 3000 B.C. Ancient Egypt and Israel also may have traded with Kerala via the Phoenicians who brought gold, ivory, apes, peacocks, and possibly wood or other materials for the famous temple of King Solomon about 1000 B.C.

During the centuries just before Christ, Roman trade developed in ginger, turmeric, cinnamon, cardamom, and the highly prized pepper. In 45 A.D. a Greek-Egyptian navigator named Hippalus discovered regular monsoon winds across the Indian Ocean. With better knowledge of the wind patterns, mariners were able to intensify their trade, and by the time of the European Middle Ages, Kerala was an important entreponnecting Europe, the Middle East, South Asia, and China. Chinese trade grew through the fifth to fifteenth centuries. It left its mark on the Kerala city of Cochin, which still uses Chinese style fishing crane and net assemblies in the now bustling harbor.25

Why is Kerala's long history of international contact and influence so important? It is probably the basis for the development of a progressive outlook by many of the state's more recent rulers. Kerala has been exposed over and over to fairly favorable contacts from outside. Greeks Egyptians, Romans, Jews, Christians, and Muslims all came mostly without conquest or bloodshed, and this long history of peaceful and prosperous relations with the outside world may have helped condition Kerala's people to respond easily to outside influences.

The greatest shock to Kerala's traditional society came with British colonialism, which imposed foreign rule and drained the local economy for the profit of British investors. Despite the many negative features of British rule, the long conditioning of Kerala's people to take worthwhile outside ideas did help them benefit in some ways. As we shall show later, several important reforms were instituted in the nineteenth century precisely in those princely states that were only indirectly ruled by the British. Early land reforms, educational expansion, and the easing of caste indignities all took place in Travancore (southern Kerala) where British political and economic interests were looked after by a local monarch.

In the late nineteenth century, outside forces began to have their greatest effects on Kerala's people. The opening of the Suez Canal in 1869 stimulated British investment in India. This was the time of deep penetration of the local Kerala economy by British plantations and rural industrial enterprises. Their activities produced in Kerala an especially large rural proletar at or landless work force that is associated in many other parts of the world with radical and revolutionary movements.26 The workers' movement in Kerala produced a combination of two important forces that have probably caused much of the state's reform success: large-scale and frequent mass actions and dedicated and self-sacrificing cadres and leaders. These developments have gone further in Kerala than in other parts of India, and, indeed, in most of the third world. This part of Kerala's history deserves more detail.

Late-nineteenth-century British investors took their primary interest in Kerala's mountains. Cool, well watered, and close to ocean transport lanes, the Western Ghats were ideal for tea and rubber plantations.27 These were followed in the early twentieth century by small-scale coir mat-weaving factories in the lowland coastal areas. Then came cashew nut processing, cigarette production, the factories, and sawmills. And of course, the extensive infrastructure to support these activities included roads, railways water drainage systems, and ports. Even today Kerala has the most developed permanent road system in India.

As the Indian workers, both male and female, were drawn into the British-owned factories and plantations, their traditional ties to landlords, priests, and high-caste patrons were weakened. They came to see themselves more and more as workers rather than primarily as Hindus, Muslims, or members of a particular caste. In loosening traditional loyalties and identities, British plantations and factories were creating in Kerala a working class conscious of itself as a class with needs and interests opposed to those of the owners. This process of proletarianization came sooner and was far more intense and concentrated in Kerala than in the rest of India.

Even as it was tearing them loose from their old identities and structures, the colonial economy was also impoverishing people, creating conditions for rebellion. Only one thing was needed to ignite the tinderbox.

The final factor in Kerala's choice of radical reform as its primary development strategy was the emergence of a remarkable number of committed and self-sacrificing organizers and leaders. From the labor unions, the caste associations, the peasant organizations, and the independence struggle, Kerala put forth men and women who devoted decades to improving the lives of the poorest farmers and workers.

Why this human factor has developed so strongly in Kerala is a difficult question to answer. Perhaps in part it comes from Kerala's sophisticated and cosmopolitan tradition, being a region historically open to trade and new ideas. Perhaps in part it comes from Kerala's ecology where factory and farm workers live next to each other and share family ties, facilitating the spread of ideology from one group to another more easily than in some third world settings. Perhaps in part it comes from the rapid growth of the rural working class through colonial penetration and the stark contrast between the elaborate and rigid caste system and the concepts of social justice and equality that have swept across the world in the nineteenth and twentieth centuries. Perhaps the rapid spread of literacy reinforced access to outside and locally developed theories of justice and equality.

Most of Kerala's organizers came eventually to join or support the Communist party of India. Most were in and out of jail much of their lives. Many were killed along with the workers they had led into a strike or demonstration. Some became disillusioned with party politics and dropped out of the struggle. A very few gave up their radical ideas and supported right-wing organizations.28

For the most part, however, the workers' and small farmers' movement in Kerala has maintained itself for over eighty years. It has produced and sustained leaders from all the major castes and religions. As recently as 1988, 750,000 people joined in popular actions in Kerala's Communist heartland of Alleppey.29 Workers and organizers are mostly aligned with one of the two major Communist parties, the Moscow-oriented Communist party of India (CPI) and the more independent Communist party of India-Marxist (CPI-M or CPM). Several smaller left-wing groups are also present. These radical organizations differ on strategies and compete with each other for members and influence but generally agree on the basic need to make the poorer groups the main beneficiaries of Kerala's development. This combination of organization, militant action, and dedicated cadres distinguishes Kerala from most of the rest of India and from much of the rest of third world.

What have Kerala's cadres and movements achieved? We now look in more detail at the accomplishments and limitations of Kerala's path to development.