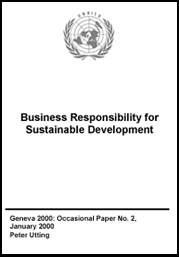 A more critical perspective on voluntary initiatives and partnerships suggests that some do little, if anything, to advance the cause of sustainable development. Certain initiatives that are a form of “co-regulation” can play, potentially, an important role in promoting corporate social and environmental responsibility. Some so-called “negotiated agreements”, where government and business work together to design and implement programmes that retain the element of state sanction in case of non-compliance, have proved fairly effective (Hanks, 1999). Another co-regulatory form is “civil regulation” (Murphy and Bendell, 1999), where NGOs and trade unions have a greater influence in determining how business relates to society and the environment. Civil regulation suggests an alternative mode of compliance, where business complies not only with national and international law, or with its own norms and standards (corporate self-regulation), but also with those determined to a large extent by civil society organizations (Murphy and Bendell, 1999). There are currently a number of important initiatives where multi-stakeholder or public-private partnerships have been engaged in designing international codes of conduct (for example, SA8000), environmental reporting standards (e.g. the Global Reporting Initiative) or standards for ethical trading (e.g. the Ethical Trading Initiative).44

44 Lead institutions associated with these initiatives are CEPAA, CERES and the Fairtrade Foundation/NEF, respectively.

A key feature of these initiatives, and a crucial area of civil regulation, involves independent verification. To overcome the weaknesses inherent in industry or company codes of conduct and environmental and social reporting, it is important that greater reliance be placed on independent monitoring and auditing by civil society organizations. But who are these verifiers? The fact that they carry the civil society label does not necessarily imply that the verification process will be reliable. The ILO, for example, is concerned that independent monitoring of codes of conduct might be carried out by private organizations or NGOs not associated with the organization, which might “lead to considerable confusion about the verification of compliance with basic standards” (Hagen, 1998). Furthermore, as indicated below, key stakeholders such as trade unions, may be marginalized in the verification process.

The issue of monitoring by appropriate organizations is also pertinent to the types of partnership being entered into between UN agencies and business. To avoid the accusation that UN organizations are too eager to join forces with big business, and are adopting loose guidelines or criteria for the selection of corporate partners, those agencies pursuing this route could engage more rigorously with civil society. NGOs and trade unions could be asked to monitor the corporations involved and verify whether they meet the standards set by the agency in question. The standards themselves should be set in consultation with civil society organizations. If this were to happen, UN-business partnerships would involve, in effect, a trilateral, as opposed to a bilateral, relationship.

Key to the success of co-regulation are not only the “soft” features of dialogue and compromise, but also the hard ones of government sanctions, laws related to disclosure of information, freedom of association and expression, and various forms of civil society protest. Also key is the legitimacy of the civil society organizations involved in drawing up codes of conducts, certification and verification.

A crucial point, which is often missed in the “command and control” versus “voluntary initiatives” debate, is that these two modes of influencing corporate behaviour are intimately linked - it is not an either/or situation. This is apparent in various respects, some of which have already been mentioned. We have seen, for example, how voluntary initiatives are often a response to some form of directive-based regulation or the threat of such regulation - they are not independent of it. Clearly, some types of regulations need to be rethought - for example, environmental regulations that focus exclusively on “end-of-pipe” solutions to deal with pollution and discourage innovation to prevent pollution (Porter and van der Linde, 1995). Considerable mileage can be gained from regulations associated with disclosure of information. According to UNEP, “the US experience... suggests that companies that are forced - or encouraged - to publish sensitive performance data soon begin to launch emission reduction programmes” (UNEP, 1994:19).

Certain forms of governmental regulation also facilitate another key driver of corporate responsibility, namely civil society activism. This is apparent not only in regard to basic human rights legislation such as freedom of association and expression which helps to cement the foundations of civic opposition and protest, but also in other respects. Continuing the example just given, UNEP also points out that “the trend [towards launching emissions reduction programmes] is accelerated by the activities of NGOs and ethical investment groups, which increasingly use the published data to benchmark environmental performance of companies operating in key sectors” (UNEP, 1994:19).

Internationally agreed standards - whether binding or not - can play a similar role. A recent analysis of the International Code of Marketing of Breastmilk Substitutes suggests that, while implementation of the Code has been subject to numerous constraints, its mere existence facilitated international citizen action:

The usefulness of the International Code should be assessed not only in terms of the number of countries which have implemented it, but also in terms of its being a tool to raise and maintain public awareness about the issue and to help build public pressure on corporations to change their inappropriate marketing practices.... Had policy makers given in to industry proposals - either to let the industry regulate itself or to work out voluntary agreements with national governments - instead of adopting the International Code, the debate would have become fractured and privatized to such an extent that effective international citizen action on transnational practices would have been much more difficult (Richter, forthcoming).

Given the somewhat chaotic state of codes of conduct, environmental and social reporting and eco-labelling, it is crucial that there be some degree of harmonization of standards, the establishment of clear indicators for measuring progress and mechanisms for independent verification (see Box 4). This would seem to be an area where the United Nations could, potentially, play a constructive role. The standard-setting process needs to make far greater use of internationally agreed benchmarks contained in Agenda 21 and various ILO and Human Rights Conventions. As an UNCTAD report on voluntary international industry environmental guidelines concludes:

... it is crucially important for environmental improvements to be measured against externally defined benchmarks of sustainable environmental practice... [T]here is a major role for national regulation and international governance in setting frameworks for corporate environmental activity, and assessment and monitoring, to ensure that industry moves toward global sustainable development (1996:86-87).

International governance in this field fell into a state of lethargy in the early 1990s. Clearly it needs to be revived. Certain recent initiatives suggest that this may indeed be happening. In its 1999 World Investment Report, UNCTAD has called for “a more structured dialogue between all parties concerned” that might examine how certain core principles related to human rights, labour standards and environmental protection45, as well as other development considerations, “could be translated into corporate practices.” (UNCTAD, 1999:369) In August 1999, the Sub-Commission on the Promotion and Protection of Human Rights agreed to a three-year inquiry to examine the activities of transnational corporations and the possibility of developing a code of conduct based on human rights standards.46 The Commission on Sustainable Development is currently supporting a review of voluntary initiatives and work by a multi-stakeholder group to define a coherent set of guidelines and principles for developing such initiatives (CSD, 1999).

45 The principles involved are those that were outlined by the United Nations Secretary-General, Kofi Annan, in a speech at the World Economic Forum, Davos, on 31 January 1999 (Annan, 1999).

46 See the Report of the Sessional Working Group on the Working Methods and Activities of Transnational Corporations on its First Session, Sub-Commission on the Promotion and Protection of Human Rights, Commission on Human Rights, 12 August 1999.

If decision-making on issues related to corporate environmental and social responsibility is to move increasingly into the international arena, it is important that the organizations involved be democratic and “participatory”. This process needs to start at home, with civil society groups attempting to influence their governments and the positions they take to international forums. Concerns raised in relation to the ISO 14000 environmental management standards47 could apply to various international organizations, including some NGOs: decisions are being unduly influenced by corporate or “Northern” interests. Furthermore, in the case of the ISO, the standards set have quickly acquired the type of status normally reserved for intergovernmental agreements (Krut and Gleckman, 1998). Clearly the doors of various international organizations need to be opened up far more to civil society organizations and participants from developing countries (Krut, 1997), although difficult issues concerning the legitimacy and accountability of NGOs need to be addressed. Similarly, there needs to be much stronger participation of Southern NGOs and grassroots organizations in the policy-making processes of a number of Northern NGOs, which claim to speak on behalf of certain Southern interests (Murphy and Bendell, 1999).

47 These concerns have been particularly well articulated by Riva Krut and Harris Gleckman (1998).