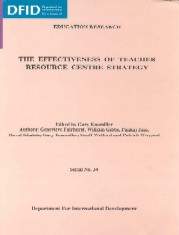 1.4 The Functioning And Use Of Centres.

Looking more closely at the way teachers' centres functioned and at who was using them during the first fifteen years, it seems important to begin with the centre warden or leader. All the surveys and reviews of teachers' centres are quick to point out how vital this role was. Matthews (1973) goes as far as claiming a centre was only as good as its warden. This appointee was a new phenomena on the educational scene, neither adviser nor senior teacher nor LEA officer, and yet they had to be a little of all these things and more besides. Both Thornbury (1973: 28), who referred to them as 'dogs bodies with many talents', and Weindling et al (1983) found that centres relied heavily on the key role of the leader. Weindling et al's findings suggest that, from the LEA point of view, the leader needed to be a qualified teacher with considerable experience in a senior teaching position, have good organisational and administrative ability and the ability to establish good relationships with a wide range of people. Also, s/he needed to be resourceful, imaginative and with a good vision of educational trends and of developments in inSET. Teachers in Weindling's study added the requirements of energy, vitality and enthusiasm and a sense of humour. They thought wardens should keep up with research and be able to disseminate relevant findings to the teaching force. They wanted tact, diplomacy and the ability to work with a range of people from different occupational backgrounds and from different levels in the educational hierarchy. The head teachers were concerned that wardens should have sufficient status to relate as equals to advisers and head teachers. From my experience as a teacher in those days, in the larger centres they certainly became men of high status. According to Thornbury (ibid.), although leaders lamented the fact that their career path was very unclear they did develop a wide range of skills and for the most part possessed and emanated amazing enthusiasm for the cause of teacher "education".

The job description was similarly all encompassing. Some of the head teachers in Weindling et al's (1983) sample identified it as one of the most difficult jobs in education, because not only was a warden expected to be 'a jack of all trades', they were also working in isolation from anyone else doing a similar job. The job was not very clearly defined, though according to Thornbury (1973) it was important that it should be seen as something distinct from any other positions in education. Weindling et al (ibid.) analysed a number of job advertisements and found that the main roles were seen as:

1. Responsibility for the management of the centre and the day to day running. - What this meant seemed to vary depending on how well resourced and staffed the centre was. It ranged from difficult cerebral problems like guiding a steering committee to make long range, well considered plans for the future to more practical issues like 'washing up the cups and saucers' (Thornbury ibid. p.28)

4. Responding to teachers needs - Weindling et al report apparent disagreement between LEA officers and wardens regarding how this might be best achieved. The wardens seemed to feel they should spend more time in schools talking to teachers, a view also reflected in some of the teachers' comments, while the LEA officers tended to regard the schools as their domain.

5. Working with the centre committee.-

6. Liaising and cooperating with the advisory team.

Weindling et al found that wardens believed they had a major responsibility to teachers. They felt their freedom to operate and their 'entrepreneurial' role were both important to this. Besides their work to identify and respond to needs, wardens also found it necessary to initiate ideas of their own on inSET and curriculum development, because they found that teachers can find it very difficult to recognise and articulate their own needs. They also found a role as adviser and consultant to heads and teachers, finding themselves acting as a channel of communication between teachers, LEAs and other inSET providers. Added to this were 'providing services and resources for teachers', a duty to ensure a neutral ground for meetings between various groups.

This multifaceted role was difficult to define. Interestingly, at this stage the life of teachers' centres, very few of Weindling et al's sample of wardens saw their role as including the support of local involvement national curriculum projects, which was the starting point of many centres, or involvement school based and school-focused inSET, which was to be identified as increasingly important the following years. However, one leader the study, very much the tradition of professional development and education rather than taking the narrower view of training, said that leaders acted 'as a stimulus to make teachers think for themselves, to make them aware of a range of possibilities and to make them responsible for their own needs' (p.84).

Besides problems of career prospects and what many leaders, according to the NUT survey (Thornbury 1973: 42), saw as a 'derisory', insulting salary, problems were also identified by both Weindling et al (1983) and Thornbury regarding who controlled the centres. Pollard (1970), quoted by Thornbury (p27), states with force that teachers' centres had been 'virtually taken over by the local education authority inspectorate'. He claimed that both 'the wardens and the committees of teachers and stool-pigeons' sought permission for everything. In Weindling et al's (ibid.) sample, many of the wardens and LEAs claimed to work closely and harmoniously together and stressed the importance of this being so. Some centres believed they were 'an integral part of the advisory service' whilst others preferred to maintain 'a degree of independence'(p. 111). However, others suggested that the advisory staff dominated the centres, deciding on the inSET programme, while the teachers' centre just provided the accommodation. A few mentioned liaison problems and even conflict with advisory officers. One leader is quoted as saying 'When advisers and the teachers' centre cooperate results are magnificent. When cooperation is not present progress is very difficult' (p. 112). Two points that emerge from this survey which are likely to influence effectiveness are: the critical role of advisers in most centres (in some they even held the budget for inSET), and how much variation there is between centres both in terms of management and of LEA involvement. The ad hoc growth of individual centres had resulted in no real common structure or level of autonomy.

A further problem discussed at the time was where wardens were supposed to get the skills and knowledge for the job, particularly regarding curriculum development. Greenwood (1973: 92) argues that if centres were supposed 'to bring about change rather than continuity' the wardens needed to be given the skills and knowledge to help them to become effective; knowledge which included 'how groups function,...of current educational thinking and practice, together with some understanding as to what curriculum development might be all about'.

As there was no specific qualification for the position of centre warden, training was only undertaken after accepting the job. Weindling et al (1983) found that in training courses new wardens, like teachers, wanted practical tips on how to organise a centre. He identifies a number of courses and conferences organised by the Schools Council and the NCTCL (National Conference of Teachers' Centre Leaders) which wardens found to be useful as opportunities for meeting other leaders and discussing issues in common. The courses, run by the DES and colleges, or which related to general management, were found to be difficult to extrapolate from or not really relevant. Possibly the most useful support for wardens was found to be local groups of wardens meeting together. These meetings 'provided mutual support to leaders who perceived themselves as somewhat professionally isolated by the unusual nature of their job' (op.cit p.81). Specific 'training' for the work done by a warden was said by a few to be impossible to provide. It seemed to be a job in which each warden had to carve out their own niche and be adept at getting fingers in pies.

As regards use of the centres at this time, Weindling et al (1983: 120) give quite a thorough analysis of who was using the centre and why. In their survey he found that the majority of teachers had used their local centre at some time but only about half used it on a regular basis and that they used it for a range of reasons. Primary teachers used them more than secondary teachers, men more than women and senior teachers more than lower grades. The amount of use possibly reflects the usefulness of attendance on courses to one's career. Weindling et al suggest that male teachers, especially at primary level, may have been particularly influenced by this relationship. Job application forms at the time certainly asked one to state the number of courses "recently" attended.

When asked to give reasons for not using the centre the problem of other commitments on time was cited more often than the feeling that the courses and activities at the centre were not relevant. This latter reason was mentioned as often as was obtaining release from school by primary teachers. Thornbury (1973) points out that when teachers' centres began to expand there were surplus teachers available to cover for inSET. However, this situation did not last long, and in the 1970s Weindling et al note that the staffing situation had become relatively static. The survey did find that 43% of the teachers had attended other forms of in-service other than that provided by their local centre.

When asked to comment on their centre or in-service education generally, most teachers were very positive about the services offered by the centre and many thought that inSET was 'valuable in order to keep up to date, refresh ideas and stop stagnation'. Teachers were not happy with the amount of in-service activities provided by the LEAs or with the timing of most activities, two thirds of which were found to happen after school time. However, they did recognise the problem of finding cover for attendance at day time courses and many felt the necessary supply cover was not provided by the LEA. In a survey by Bradley et al (1974: 44), in Nottingham, it was found that 'surprisingly few teachers appeared interested in joining a small discussion group' with clear aims to look at specific areas of teaching, devise methods appropriate to the context, experiment and finally evaluate the result. However, the authors fail to explain why they expected greater involvement in such time consuming, dedicated work on the part of full time teachers. They also found that teachers tended to see 'the content of in-service education as something functionally related to their daily professional task' with many still feeling 'the need for what might be termed the "bread and butter" type activities which can be related easily with the classroom situation and to which they can be directly transferred'(ibid).

When Weindling et al's (1983) survey tried to find school factors which might influence teachers' involvement with centres they found that the head teacher was a key factor, particularly in primary school. In schools where a staff had a high level of involvement in the centre the head teacher was found to have a positive attitude to the centre, to the centre leader and to inSET in general. They were also often found to be 'directly involved in the centre' either in a managerial or course leadership role. The centre wardens, when discussing the difficulty of communicating effectively with schools, particularly mentioned the important role head teachers had in 'alerting teachers to centre activities'. Keen head teachers were found to read through centre schedules and point out particular activities which might (or should) be of interest to particular teachers on the staff. They very rarely refused day release for courses and often covered personally for teachers who were attending teachers' centre activities. It was also noticeable that these heads placed great importance on regularly discussing curriculum matters with the staff and had given posts of responsibility for particular curricular areas.