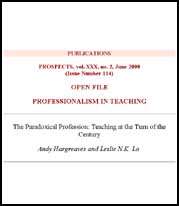 Professional actions and cultures of teaching

All of these papers, with one exception, are drawn from many years of research and thinking among a network of leading researchers from nine countries and regions around the world. The network in which these researchers (including the writers represented here) have participated is called Professional Actions and Cultures of Teaching (PACT). This network was first initiated and directed by Andy Hargreaves and Ivor Goodson in 1992. It was established so that senior researchers, working in different countries, using different methodologies and drawing on different theoretical traditions, could bring together their varied research findings, ideas and expertise to develop a shared knowledge base of teacher professionalism. This knowledge base would be employed to try and move the educational community's understanding ahead, on a wider front. New projects on the emotions of teacher professionalism, the special traditions and qualities of collaborative professionalism in Japan, and the changing landscape of teachers' work in Scandinavia were all prompted by participation in the group and have deepened the knowledge base of teacher professionalism as a result.

PACT was established first and foremost as a professional and intellectual community for its participants. In the same way as teacher professionalism, researchers and the quality of their work benefit from being involved in and supported by strong professional communities, where collaboration, discussion, and working through different cultural and intellectual traditions strengthen the collective quality of the profession's work. That work is represented in this edition of Prospects and also in other group publications (e.g. Hargreaves & Goodson, 1996; Hargreaves & Evans, 1997).

As a professional and intellectual network, PACT has never sought to restrict itself to esoteric discussion among inward looking intellectuals. Many of its meetings have been organized in tandem with national conferences. It has also instituted associated publications serving the wider educational profession. These meetings have taken place in regions and countries as varied as North America, the United Kingdom, Norway and Hong Kong. A key aim has been to engage and communicate with the wider educational profession, so that PACT could not only investigate and learn about the present state of teaching as a profession, but also work with policymakers and practitioners to help re-invent its future. Various organizations have, at times, supported PACT in this work and we wish here to acknowledge the valuable support they have offered. They include: The Ontario Public School Teachers' Federation (now the Elementary Teachers' Federation of Ontario); the Social Science and Humanities Research Council of Canada; the Association of Teachers and Lecturers; The National Association of Headteachers; the Roehampton Institute of Education and the Times Educational Supplement in the United Kingdom; the Nordic Educational Research Council and the University of Oslo in Scandinavia; and the Chinese University of Hong Kong in Asia.

Under its new directors, Leslie Lo and Brian Caldwell, PACT hopes that through UNESCO's influential journal, Prospects and other means listed on its website, that its work can reach out to engage with the international educational community as it struggles to redefine and, in some cases, to form for the first time a new professionalism in teaching that is truly suited to and equipped for the challenges and demands of a new century.