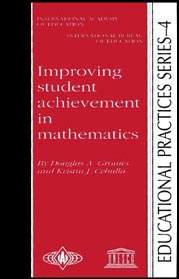 There is a long history of research, going back to the 1940s and the work of William Brownell, on the effects of teaching for meaning and understanding in mathematics. Investigations have consistently shown that an emphasis on teaching for meaning has positive effects on student learning, including better initial learning, greater retention and an increased likelihood that the ideas will be used in new situations. These results have also been found in studies conducted in high-poverty areas.

As might be expected, the concept of ‘teaching for meaning’ has varied somewhat from study to study, and has evolved over time. Teachers will want to consider how various interpretations of this concept can be incorporated into their classroom practice.

· Emphasize the mathematical meanings of ideas, including how the idea, concept or skill is connected in multiple ways to other mathematical ideas in a logically consistent and sensible manner. Thus, for subtraction, emphasize the inverse, or ’undoing’, relationship between it and addition. In general, emphasis on meaning was common in early research in this area in the late 1930s, and its purpose was to avoid the mathematical meaningfulness of the ideas taught receiving only minor attention compared to a heavy emphasis on the social uses and utility of mathematics in everyday life.

· Create a classroom learning context in which students can construct meaning. Students can learn important mathematics both in contexts that are closely connected to real-life situations and in those that are purely mathematical. The abstractness of a learning environment and how students relate to it must be carefully regulated, closely monitored and thoughtfully chosen. Consideration should be given to students’ interests and backgrounds. The mathematics taught and learned must seem reasonable to students and make sense to them. An important factor in teaching for meaning is connecting the new ideas and skills to students’ past knowledge and experience.

· Make explicit the connections between mathematics and other subjects. For example, instruction could relate data-gathering and data-representation skills to public opinion polling in social studies. Or, it could relate the mathematical concept of direct variation to the concept of force in physics to help establish a real-world referent for the idea.

· Attend to student meanings and student understanding in instruction. Students’ conceptions of the same idea will vary, as will their methods of solving problems and carrying out procedures. Teachers should build on students’ intuitive notions and methods in designing and implementing instruction.