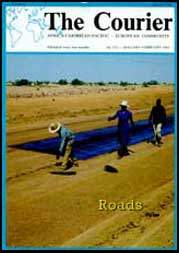 UNESCO has a range of competences which is extremely wide - education, science, culture and communications as well as a very large number of Member States (more than 160). But what makes its job as difficult as it is exciting, is the very nature of the issues it has to deal with - problems of interest to both individuals and governments and problems whose solutions will, to a large measure affect the future of us all. UNESCO’s Director-General, Federico Mayor, analyses these for the Courier.

During their 14th Meeting held in Brussels on 13 and 14 November, the social partners focused on problems of education and training in conjunction with investment and employment. As this was their first meeting since the signature of LomV, they also discussed the innovations in the new Convention which enhance their role in the implementation of ACP-EEC cooperation.

CONGO: Drawing from the lessons learned “from history and international events”, the People’s Republic of the Congo has turned its back on the Marxism-Leninism which supplied the model for its organisation and economic and political development. But how does one achieve, without pain, the transition from centralised concepts and structures to a system founded on the population’s own enhanced economic and political responsibilities.

Good road networks are recognised as essential to the development process. This is reflected in the large number of projects devoted to road schemes over the past three decades. Now, many ACP countries are facing a maintenance ‘crisis’ which threatens to curtail economic activity at what is already a difficult time. The Dossier looks at how new policies for the 1990s can help to tackle this and other road-related problems.