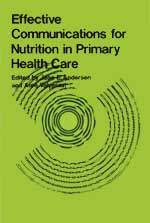 Protein-energy malnutrition has been a major nutritional problem in Thailand. The most recent nutrition surveillance data revealed that about 51 per cent of 0- to 5-year-old children in the country are still suffering from various degrees of malnutrition [1]. The highest prevalence has been observed in the north-east region of the country.

Reports from various countries, including Thailand, Malaysia, and the Philippines, have shown that improvement in economic status may not necessarily bring about better nutritional status in a population [2, 3]. The community-based nutrition research programme conducted in the north-east by the Institute of Nutrition, Mahidol University (lNMU), strongly supported this finding. Nutrition education was found to be essential to the integrated nutrition, health, food supply, and income-generation programme if the nutritional status of the most vulnerable 0- to 5year-old children was to be improved [4].

In an attempt to produce a behavioural change in food practices, a study on the use and impact of interactive video tapes and radio was initiated. Methodologies for media production and possible dissemination, and the effectiveness of each medium, singly and in combination, for communicating nutrition information to rural populations, was evaluated.

The project included 48 villages in Ubon and Sri Saket provinces in the north-east. These villages were identified from three districts of each province and randomly assigned to TV and control for the Ubon villages and radio alone or TV plus radio for the Sri Saket villages.

TV could be brought to the village with an "interactor" in a video van, whereas radio broadcasts could be sent through the existing radio network in Sri Saket. The selection of these two media was based on their characteristics. Although TV provides both audio and visual exposure, it cannot be used frequently. Radio, as an audio medium, is accessible throughout the country. Messages were short, easily remembered, and broadcast frequently. It was thus hypothesized that a combination of TV and radio should have the strongest impact. Because TV exposure was less frequent it was felt that radio could be used much more often to reinforce the message. However, for study purposes, exposure to each of the media was maintained on an equal level.

The main topic for this nutrition communication was the promotion of proper supplementary feeding at the community level. The target audience was mothers of 0- to 4-year-old children. The activities included:

A food product named "Luk Ruk" was made available as a food supply supplement. It consisted of rice, mung bean, and sesame or groundnut. Each ingredient was packed separately in small packets and then together in a big package with a label. The product was formulated by INMU [5]. In this study it was sold for 2 baht (US$0.09).

Four modules of video tapes and radio programmes were produced. The message was on proper supplementary feeding and related sound nutrition practices. The interactive video tape was 25 to 30 minutes long with an additional 15 minutes of interaction. Radio spots were 30 seconds and one minute in length and were broadcast seven times daily. All media were developmentally tested prior to implementation of the programmes.

A video van equipped with video-tape equipment visited each village once a week during the summer period (February to May) and less frequently during the farming period (June to December). Related radio messages were broadcast according to which module of the video tape was being shown.

An interactor rode with the video van and acted as a motivator to encourage the audience to answer questions at each interaction point in the programme. Their other job was the collection of records of sale and of video-tape showings and resupplying the product. The interactor also served as a linkage between product distributor and programme manager for comments, troubleshooting, and resolving any difficulties there may have been during the field-work.

Baseline data were collected in May 1981 and January 1982. Impact evaluation was done in May 1982 and January and May 1983. Approximately 2,500 mothers were interviewed and 3,000 children were weighed and had their heights measured. The interview included the assessment of changes in the knowledge, attitudes, and practices of the target audience. The nutritional status of 0- to 4-year-old children was also assessed.

Results and discussion in this paper will be limited to the results obtained up to the first impact evaluation in May 1982.

Because village health communicators (VHC) were present as product distributors in each village, they in fact served as a further channel of nutrition education exposure. Exposure to the various media is shown in table 1.

The TV exposure of the audience is visual, auditory, and interactive, while radio is only auditory. It should be noted that, although both media were tested prior to field implementation, radio messages broadcast during this first three months of implementation required further improvement.

a. The broadcast message prepared by the research team and an occasional message on child-rearing arranged by Radio Sri Saket.
b. Messages on general nutrition and child-rearing broadcast as regular progammes of Ubon radio stations.

This consisted of TV and interactor. It was obvious that the message that was presented visually was clear and well understood, leading to active participation in answering questions. Moreover, correct answers could be reinforced, thereby further encouraging the audience to respond to the interactions. This can be diagramatically shown as:

Radio messages did not appear to be striking enough to catch the audience's attention. The short radio spots broadcast as 30-second songs were well understood, especially by children. Interviews with some mothers, who mentioned hearing the message although they could not elaborate upon the content, indicated that the spot contained too much information to remember.

Individual variations in the characteristics of the VHCs were not expected to produce substantial differences. It was found that the active VHCs were more enthusiastic and hard working, and spent more time on the project. VHCs who were most respected by the villagers, and who had fewer family duties, tended to be more active. This contributed greatly to the motivation of villagers to take an active interest in the project.

Regular meetings between the research team and village health communicators served as a good opportunity to discuss problems and exchange information on various solutions, both among themselves and with the research team. It was also a good chance for supervision, giving additional guidance, etc.

Changes in Knowledge, Attitudes and Practices

Some of the changes in knowledge and attitudes were clearly seen in the first impact evaluation (May 1982) compared to the baseline data, as shown in tables 2 and 3.

It should be noted that the effective perception of the mothers in Ubon was significantly better than that of those in Sri Saket. This is confirmed by the baseline data and by observations made by field-workers during the implementation, though attempts were made to match them during the selection of the study areas. Therefore, the results of the TV and TV plus radio should not be compared for interpretation of the findings.

Table 2. Comparison of knowledge and desirable attitudes as measured by percentage of desirable answers by target audience

Table 3. Comparison of correct answers obtained according to conditions of the experiment, May 1982

Table 4. Change in nutritional status of 0- to 4-year-old children

Change in Nutritional Status of 0- to 4-year-old Children

An assessment was made of the nutritional status of 0- to 4-year-old children. Due to seasonal variation in nutritional status, this was done twice yearly, in January and May. The change during the first phase of the study is shown in table 4.

Nutritional status, as measured by weight for age, did not appear to improve between the baseline assessment and the first impact assessment. However the data must be interpreted carefully. It was found that age distribution of the measured population, accuracy of birthdate, seasonal variation, etc., are among the factors that need to be taken into account in data analysis and interpretation.

Sales Volume of the Food Products

It was expected that the growth in the volume of sales of the food product would be the result of the impact of the nutrition education programme. The results so far have not shown such a relationship. In other words, sales volume is not a specific and sensitive indicator for measuring the effect of media intervention. Factors that have an effect include availability of money, cooking and feeding methods, enthusiasm of the product distributors, etc. It was noticeable that active village product distributors could motivate their peer groups.

Nutrition education using radio and an interactive video van was conducted in Ubon and Sri Saket. A video van equipped with video tape and accompanied by an interactor carried the programme to rural villages. Four modules of video tape were shown three times each during the period of January to May 1982. The radio broadcast brought the same message through radio Sri Saket. Radio spots one minute or 30 seconds long were broadcast seven times daily.

The results showed that the interactive video-tape programme had a striking effect on knowledge and attitudes, but not much effect on practices as yet. Clear visualization and interaction facilitated learning. The radio did not appear to affect learning at this stage. It was observed that the message forms needed further improvement. The village health communicators, who served as village-based product distributors, were good at motivating villagers to attend the video-tape showings, to listen to radio programmes, and to use the supplementary food product.

a. Baseline for video module 4.

The effect of the programme on nutritional status has not yet been established. Careful interpretation of the anthropometric measurement was necessary. The sales volume of the product did not reflect the effect of the nutrition education programme alone, as other factors were also involved. Additional information from the subsequent impact evaluations should make interpretation of the results easier.

Process evaluation was very useful, and efforts should be made to develop this in more detail in order to obtain a better understanding of the efficiency and efficacy of interactive video, either alone or in combination with radio messages, in inducing behavioural change.

2. FAO Regional Office for Asia and the Pacific, Poverty and/or Ignorance. A Socio-economic Study of Nutritional Problems in Thailand and the Philippines, RAPA 59 (FAO, Bangkok, 1982).

3. FAO Regional Office for Asia and the Pacific, The Relationship between Economic Growth and Nutritional Improvement in Peninsular Malaysia, RAPA 70 (FAO, Bangkok, 1983).

4. S. Dhanamitta, S. Virojsailee, and A. Valyasevi, "Implementation of a Conceptual Scheme for Improving the Nutritional Status of the Rural Poor in Thailand," Food and Nutrition Bulletin 3(3): 11-15 (1981).