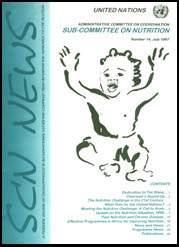 Update on the Nutrition Situation, 1996

New estimates of trends in malnutrition show some improvement worldwide, but at a substantially slower rate in the last few years than in the 1980s. This slowdown is cause for concern. It means that while the end of hunger and malnutrition had been coming into sight in the distant future, this prospect is now receding again. For example, at the 1990s' rate malnutrition would not be overcome in South Asia for the next 200 years. Goals from the World Summit for Children of 1990, and the International Conference on Nutrition of 1992, of halving the prevalence of malnutrition between 1990 and 2000, are becoming even less likely to be met as the decade goes on. More than ever, further action is needed.

Some of the reasons for this slowdown can be quite readily understood, while others are less clear and need to be elucidated. Poor economic performance in recent years has led to failure to further reduce poverty in many countries, in contrast to the 1980s, having a direct effect on nutrition. Drought in parts of Africa and Asia has also contributed.

At the same time, some important interventions for child health, notably immunization, reached nearly maximum population coverage. The beneficial effects of these programmes on nutrition having been achieved, further progress becomes more difficult.

The proportion of children underweight provides the commonest indicator of malnutrition. Being underweight - even mildly - increases risk of death and inhibits cognitive development in children, leading to less fit and productive adults; moreover it perpetuates the problem from one generation to the next, through malnourished women having low birth weight babies.

As can be seen in the Figure, the underweight prevalence in South Asia (of which India is over 70% of the population) is around 50%. This is half again higher than the next region, South East Asia, where around one third (32% in 1995) of the children are underweight. Sub-Saharan Africa, in contrast, has a tower prevalence of nearly 30%. The global prevalence (for developing countries) is estimated to be 29% in 1995. Translating these prevalences into numbers of children (see Table), we can see that over half of the world's underweight children are in South Asia: 85 million out of a global total estimated at about 160 million.

Trends in underweight prevalences are the key consideration, telling us about progress in nutrition it self, and more generally in human development. The global goal of halving the prevalence from 1990 to 2000 means bringing the 30% prevalence down to 15% in the decade, an overall rate of -1.5 percentage points per year. The global 1985-90 rate was about half this on average (although some countries could have reached the goal), but the 1990-95 rate has slipped, globally and in most regions, to less than one fifth of that necessary.

The most common pattern seen is an improving trend in the 1980s, becoming relatively slower in the early 1990s, with some evidence for speeding up again in the last year or two. In Sub-Saharan Africa the situation has been nearly static, on average, for the last decade. Different patterns are seen in different countries: some like Zimbabwe and Kenya showing the more usual pattern ('90s trend worse than '80s); others such as Madagascar and Zambia the opposite way round. But most of Sub-Saharan Africa is now worse off nutritionally than 10 years ago.

Being underweight - even mildly - increases risk of death and inhibits cognitive development in children, leading to less fit and productive adults; moreover it perpetuates the problem from one generation to the next, through malnourished women having low birth weight babies.

South Asian trends on average depend substantially on the situation in India, which is revising the process of monitoring child malnutrition so that numbers are particularly uncertain at the moment. The present prevalence levels take account of a recent national survey, which lowered the estimates compared to previous results (from around 61% to 53%), but this represents a revised figure, not itself an improvement. Trends for South Asia shown in the Figure are in line with results from previous time series data in five states in India; these again showed improvement in the '80s followed by reversal in the early '90s. The overall prevalence change in the last decade was just adequate to bring down numbers of children underweight in South Asia, despite population growth.

In South East Asia, the overall trend has been of rapid improvement in the '80s, and slowdown again in the '90s. While part of the slowdown is related to some faltering in economic growth, at various times in different places, this does not seem to give the full story, and careful examination of other factors is needed.

In China, while in 1990-93 rates of improvement were reduced, the average rate (to be treated with caution among one billion people) then picked up. Differential patterns of malnutrition are being reported between urban and rural areas.

Countries in Middle America and the Caribbean, South America, and Near East and North Africa have relatively low prevalences of underweight children, and less far to go to eliminate malnutrition. Yet here too accelerated progress is essential; indeed there is cause for concern to ensure that the trend does not reverse and deteriorate, for example in Middle America and the Caribbean.

Possible future scenarios for prevalences can be examined by looking at the implications of continuing the best and worst rates of change of the last ten years. Calculations illustrate that by the year 2010, if the best rates were re-established, the prevalences on average in most regions would be half or less of those in 1995. But the most affected regions - South Asia and Sub-Saharan Africa - even in the optimistic scenario, would be far from this goal. Poverty reduction coupled with support for agricultural and rural development, for health and education, and with extensive and sustained community based programmes aimed at improving nutrition, have brought about rapid improvement in a number of countries. These have been particularly effective where they have supported and improved the status of women. Such policies could change the scenarios for much of Africa and Asian