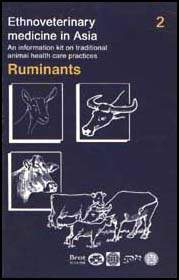 · Animal is thin and looks weak.
· Lack of appetite.
· Anemia. The first symptom is a pale color of the skin, snout, nostrils and gums. The flesh is pale.
· Diarrhea.
· Enlarged abdomen.

Various types of parasites living in the stomach and gut.

Life cycle of roundworms in cattle, water buffalo and goats

Young and malnourished animals of both sexes are most susceptible to parasites. The problem is especially common in the rainy season. The animals may become dehydrated and die.

The parasites are transmitted when an animal eats grasses or drinks water contaminated with larvae. Less commonly, they can be spread from the mother to its offspring,.

· Deworm the animal regularly. Use the herbal dewormers listed in the table. These dosages are for cattle and buffaloes. Use half these amounts for calves, sheep and goats.

· Rotate pasture. Do not use always the same pasture area to graze the animals. Rotation will help the grasses to rejuvenate and will protect the animals from infected grasses.

· Keep the animals and the surroundings clean.