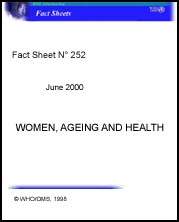 Three basic considerations impel the greater recognition of health of ageing women as a major health and development issue for the future:

· The numbers of ageing women are increasing worldwide;

· Women's life course beyond age 50 extends for a significant period and is increasing everywhere in the world; and

· There is a very significant scope for improving the health of ageing women and thus ensuring that they remain a resource for their families and communities.

There are significant differences in life expectancy of women and men. In the developed nations of the world, women live on average six to eight years longer than men. Life expectancy for women now exceeds 80 years in at least 35 countries and is approaching this threshold in several other countries. However, the life expectancy of women in countries at different levels of development is markedly different, ranging from just over 50 years in the least developed countries through the 60s and 70s in those undergoing rapid economic development.

More than forty-five countries now have estimates of healthy life expectancy. One general conclusion is warranted based on these studies: women can generally expect to spend more years of their lives with some functional limitations than men. This is valid for developed as well as developing countries.

Among the types of disability, mobility disability, in particular walking disability, is currently acknowledged as one of the most important quality of life and public health concerns of older women. Slow walking speed is a risk factor for falls and other accidents, resulting in fractures, further disability and loss of independence. In developing countries, loosing the ability to walk may be associated with even greater risks of adverse outcomes as walking is often the most common means of transportation.

While older women may suffer more functional limitations than men, it is inaccurate to say that older women are generally frail. It must be emphasised that the vast majority of older women and men are in generally good health, especially during the "young-old" ages. Recent studies in developed countries have shown that the prevalence of disability for both women and men to be less than 5 per cent for persons aged 60 to 64, less than 10 per cent for persons aged 70 to 74, and then rising to slightly more than 20 per cent among those aged 85 and over. And in developed countries, the rates of nursing home use are generally very low for persons under the age of 80. But with more and more women reaching 80 plus there is concern about the quality of their extended lives.

There are powerful economic, social, political and cultural determinants which influence how women age, with far-reaching consequences for health and quality of life, as well as costs to the health care systems. For example, poverty at older ages often reflects poor economic status earlier in life and is a determinant of health at all stages of life. Countries that have data on poverty by age and sex (mostly the developed countries) show that older women are more likely to be poor than older men. But in many developing countries there are often simply no reliable data on poverty tabulated by sex and age.

Poverty is also linked to inadequate access to food and nutrition and the health of older women often reflects the cumulative impact of poor diets. For example, years of child bearing and sacrificing her own nutrition to that of the family can leave the older woman with chronic anaemia.

Another determinant of health is education; levels of education and literacy among current cohorts of older women in developing countries are low. Increased literacy for older women will bring health benefits for them and their families.

Lack of safe drinking water, a gender-based division of domestic chores (including the carrying of water), environmental hazards, such as contact with polluted water, agricultural pesticides and indoor air pollution, all have a cumulative negative impact on the health of women as they age in many developing countries.

Older women everywhere are far more likely to be widowed than older men and most women can expect widowhood to be a normal part of their adult daily lives. While most women adjust both emotionally and financially to their changed situation, traditional widowhood practices in some countries result in situations of violence and abuse and pose a serious threat to older women's health and well-being.

Widowhood is often being preceded by a period of caregiving to the deceased spouse combined in many cases with caregiving to dependent parents, grandchildren and other dependent family members. Older women are an important source of caregiving and such activities are most often unremunerated.

In many countries, access to health care is tied to coverage by national social security and health insurance systems which in turn is linked to employment in the formal sector of the economy. As many older women in developing countries have worked all of their lives in the informal sector or in unpaid activities, access to health care often remains unaffordable and difficult at best.

What is a gender-sensitive life course approach to older women's health? Because the major preventable causes of morbidity and mortality all take effect over the life course, prevention strategies will be most effective when initiated as early in the life course as possible. For example, the health benefits of exercise and physical activities are well known and exercise should be promoted in all age groups from children to centenarians. Barriers for girls and women to exercise should be removed and culturally appropriate strategies for exercise should be put into place. This would help prevent functional dependence in old age and maintain mobility of older women at an adequate level for management of daily life.

Other modifiable risk factors associated with poor mobility in old age include smoking and deviance from normal weight. Cessation of smoking, promotion of exercise and improved diet are in fact primary prevention strategies for many causes of death and disability. In addition, it is of paramount importance that younger women have the opportunity to build and maintain strong bones in order to maintain bone density and prevent osteoporosis at later ages.

Another example of preventable diseases is heart disease and stroke which are the major causes of death and disability in ageing women, accounting for close to 60% of all adult female deaths. The common view of heart disease and stroke as men's health problems has tended to overshadow the recognition of their significance for ageing women's health. Half of all deaths of women over 50 in developing countries are due to these conditions. Although communicable diseases are not yet fully controlled in these countries, they are no longer important causes of sickness and death in old age.

For many types of cancer, particularly breast cancer and cervical cancer, early detection is the main strategy for prevention. For breast cancer early detection include physical examination of the breasts by trained health workers, breast self examination and mammography. As general screening programmes by mammography are still far beyond the resources of developing countries, there is an urgent need to improve the effectiveness of breast self examinations strategies.

WHO's response to maintain the health of older women

WHO's Ageing and Health Programme (AHE) recognises that gender is one of the major determinants of health. In addition to biological differences, a gender approach to health includes an analysis of how different social and economic roles, decision-making power and access to resources affect the health status of men and women at older ages.

The AHE Programme is committed to apply the gender perspective in all of its activities, notably in the areas of research, information dissemination, training, advocacy and policy development. Moreover, the Programme promotes the concept of Active Ageing which stresses that older people are a resource for their families and communities and that policies should be developed which enable older people to remain active for as long as possible in their later years. To facilitate the implementation of Active Ageing policies and strategies at all levels - national and community - gender sensitive guidelines and strategies are being developed. The AHE Programme works in close partnership with Governments, academic institutions and civil society organisations.