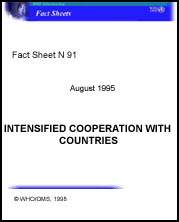 There are 1.3 billion poor people in the world today and the number is increasing. The health status gap between rich and poor, not only between countries but within all societies, is not acceptable.

· The numbers of what the United Nations calls the “least developed countries” (LDCs), i.e. the poorest of the poor, rose from 27 in 1975 to 48 today.

· Average life expectancy is 22 years longer in developed countries than in LDCs years compared to 54 years.

· In the late 1980s in many poor countries the death rate for women due to maternal complications was 100 times greater than in rich countries.

A New WHO Approach

· Focuses on the specific priority development needs of each individual country.

· Strengthens each country’s capacity to design and implement its own health development plan.

· Works closely with donor agencies, development banks and NGOs to ensure a better coordination of external aid, and to attract additional funds for health.

· Works closely with WHO country offices, with the support of headquarters and regional offices, to respond rapidly to country requests, especially those of the most vulnerable populations.

What is Actually Being Done

Guinea-Bissau: through ICO, more effective management in targeted districts (among the poorest in the entire world) has helped to increase children’s immunization by 45% for the tuberculosis vaccine BCG and by 25% for the triple vaccine against diphtheria, pertussis or whooping cough and tetanus (DPT3) and measles over a period of three years.

Guatemala: WHO/PAHO has opened three district health offices in the extremely poor areas of Quiche and Huehuetenango, the first WHO field offices in Latin America, and plans to open two more. They are supporting the development of local management capacity for improving health service delivery to poor Indians.

Mozambique: ICO helped the government to prepare an integrated health plan for Manica Province and to negotiate agreement for US$ 20 million support by Finland over a period of 12 years.

Mongolia: WHO has assumed the leadership role in supporting the Government in coordinating external funding for the health sector, and in reorganizing the country’s health services.

Bolivia: WHO/PAHO is the sole external health agency supporting the people of the poor Altiplano region of Tupiza, improving people’s access to health facilities by helping to develop a local health system.

Outlook for the Future

At present, Intensified WHO Cooperation operates in 26 countries and the number is increasing in response to growing demands. ICO hopes to work with all 48 LDCs by the year 2000.