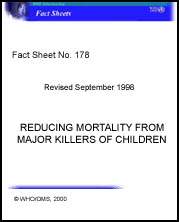 Each year, more than eleven million children die from the effects of disease and inadequate nutrition. In some countries, more than one in five children die before they reach their fifth birthday, and many of those who do survive are unable to grow and develop to their full potential.

Seven out of 10 of childhood deaths in developing countries can be attributed to just five main causes, or often to a combination of them: pneumonia, diarrhoea, measles, malaria and malnutrition. Around the world, three out of every four children seen by health services are suffering from at least one of these conditions.

While a great deal has been learned from disease-specific control programmes during the past 15 years, the challenge remained how to combine the lessons learned into a single method for more efficient and effective management of childhood illness. WHO, in collaboration with UNICEF, responded by jointly developing an approach called Integrated Management of Childhood Illness (IMCI).

The World Bank's World Development Report 1993 describes the Integrated Management of Childhood Illness as the intervention likely to have the greatest impact in reducing the global burden of disease. It is also among the most cost-effective health interventions in low- and middle-income countries. Indeed, adoption and implementation of this approach are now deemed essential to reaching the goal set by the 1990 World Summit for Children of reducing childhood mortality by 50% by the year 2000.