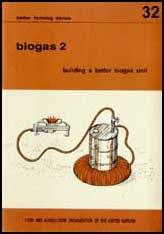 Many of the booklets deal with specific crops and techniques, while others are intended to give the farmer more general information which can help him to understand why he does what he does, so that he will be able to do it better. This booklet was added to the series owing to the favourable comments received on Booklet No. 31, Biogas: what it is; how it is made; how to use it. Both booklets have been based on published works by researchers and experimenters in small scale biogas production in Africa, Asia, Europe and North America.

Adaptations of the series, or of individual volumes in it, have been published in Arabic, Bengali, Creole, Hindi, Igala, Indonesian, Kiswahili, Malagasy, SiSwati, Thai and Turkish.