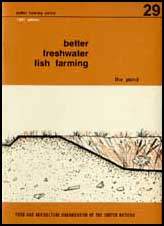 How to build a new, bigger pond

50. First mark out a big square on the site you have chosen, about 21 by 21 metres. Mark the corners with pegs and run a string between the pegs to show you where the outside of the banks will be.

51. Clear the big square of all trees, bushes and grass and take away ail the big roots you can.

52. Take away about 20 centimetres of topsoil from all over the square. Put the topsoil aside. Later you will put it back on the top and outer sides of the banks.

53. Then mark out a small square inside the big square, about 15 by 15 metres. Mark the corners with pegs and run a string between the pegs to show you where the inside of the banks will be.

Mark out a small square

54. The bottom of the bank in the shallow part of your pond and along the sides should be about 1 metre from the upper end and sides of the small square.

55. The bottom of the bank in the deepest part of your pond should be about 2 metres from the lower end of the small square.

The bottom of the bank

56. Now mark out a third smaller area in the centre of your pond, about 12 by 13 metres. We will call this the central area. Mark the corners with pegs and run a string between the pegs to show where the bottom of the banks will be.

57. Be sure that all the pegs and strings marking the 21- metre square, the 1 5- metre square and the central area are set up in the way shown in the drawings.

58. Now you are ready to begin digging out soil from inside the central area to build the banks of your pond.

59. Ask your neighbours to help you to dig your big pond. Then you can help them in turn to dig their ponds.

60. Shared work is lighter work. When we work together with our neighbours, the work is easier and better.

63. When you come to roots, take away as much of them as you can.

Take away the roots

64. Whenever the loose soil you put on the banks reaches half as high as your knees, pack it down tightly. You can do this by beating the soil with a heavy plank, a length of tree trunk or an earth tamper.

Pack down the soil tightly

65. When you are digging, keep the slope of the pond bottom as regular as you can. It should slope gently down from the upper end to the deepest part. The bottom of the pond should have slopes like these in the drawings.
66. Begin again to dig soil out of the central area. Dig 20 more centimetres from the upper end and 30 more centimetres from the deepest part. Put the soil on the banks and Pack it down tightly as before.

68. When you have finished digging out the central area and you have put on the banks all the soil that you have taken out, you will have a hole 12 by 13 metres with straight sides. Now it is time to shape the banks.

69. Dig the soil away from the edges of the central area to form the slope of the banks. Put this soil on top of the banks and pack it down tightly.

Dig soil away to shape banks

71. The top of the banks should be about 1.5 metres wide and should be straight and flat all the way around the pond.

The top of bank

72. Put the 20 centimetres of topsoil you took away when you began digging on the top and outer sides of the banks. Plant grass on the banks. Banks covered with grass last longer.

the bottom of pond

74. Be sure that the bottom of the pond is fairly smooth and regular.

75. Now dig a ditch in the bottom of the pond from the centre to the lower end. The ditch should be about 50 centimetres wide and about 20 centimetres deep. This ditch will help to drain out all the water when you empty your pond.

76. When the ditch is finished, remove all loose soil and other trash from the bottom of the pond.

77. Now you are ready to install your inlet, outlet and overflow.