There are a number of possible impacts of household energy on the environment, which will affect both the local and the global environment. Some of the main concerns are as follows;

Fuelwood depletion is the problem that can have the most immediate impact on the community who use the forest resources. It is now widely accepted that fuel use is not the main cause of deforestation, as compared to the impact of commercial logging and land clearance for agriculture. However, where forests are depleted, fuel demands add increased pressures on remaining forest areas.

As new reserves of coal, oil and natural gas are found around the world, fossil fuel resource depletion is no longer considered the major crisis in the global energy sector. Nonetheless, the need for conservation for future generations should still not be forgotten. Fossil fuel consumption is also directly related to global warming (see below).

Loss of forestry has a direct impact on the natural surrounding environment. Some of the papers in this issue discuss the knock-on effects of deforestation, which include loss of forests environment, soil erosion and local climatic changes. All of these will add to the loss of the diversity in the local plant and wild life.

As Boiling Point 40 addressed in detail, the greatest impact of household energy on human health is due to pollution of the indoor environment. Smoke in the kitchen has been shown to be one of the main factors in many deaths in children under the age of five, as well as the cause of many illnesses and discomforts for women.

Global warming has been shown to be caused by two factors.

· the release of so-called greenhouse gases to the atmosphere; carbon dioxide (CO2), which is released when fossil and biomass fuels are burned, and to a lesser extent, methane (CH4) and nitrous oxide (N2O), formed when there is incomplete combustion of fuels.

· Deforestation: trees and plants absorb CO2 so when the forests are destroyed, less CO2 is removed from the atmosphere, so increasing the greenhouse effect.

Although not seen on a daily basis, over a number of years the impacts of global warming will be felt in different parts of the world. Some authorities claim that recent natural disasters around the world have been due partly to global warming whose main effect is to raise global temperatures, thereby increasing drought in some places, and creating floods in others. A range of other climatic changes are also predicted.

It would be easy to view environmental conservation as a costly addition in time and resources to a household energy project. A win-win benefit is one in which a benefit in one way also gives a benefit in another way. In fact environmental gain will, in most cases, result in additional wider benefits. This can be classed as a win-win situation, where both the environment and the communities involved benefit. A few examples of win-win benefits are given below. 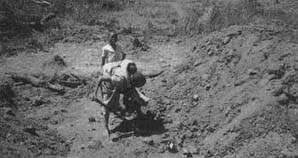 Improved cooking stoves should give a higher efficiency, which mean less time collecting wood and cooking, so more time can be devoted to the family or to productive enterprises. The environmental gains are of course, reduction in fuelwood consumed, causing less impact on forestry and lower global warming emissions.

Another benefit of improved cooking stoves and the use of other higher grade fuels are the health benefits. By reducing the use of fuel wood, there is a significant reduction in exposure to smoke emissions for the cook and for her children.

There are a wide range of benefits which increased forestry cover has on the local ecosystem and the knock-on benefits to farming. These include improved water retention and soil nutrition. In addition, properly managed forests will allow for a wide range of biodiversity, therefore animal and plant species will not be lost.

Using urban waste as an energy source is a new concept in the household energy sector. The workshop described by Dunnett details the win-win opportunities for both energy supply and for reducing the potential environmental hazards of rotting waste on urban streets.

The introduction of improved and renewable energy technologies often opens up opportunities for developing local business. A commercial approach to producing, distributing and maintaining improved stoves has been shown to be the best and most sustainable approach. The article by Kimani recommends a commercialized approach even in refugee situations, where livelihoods are in a very fine balance.

However, there remain a number of obstacles for the introduction of environmental conservation measures in the household energy sector.

Land ownership and forestry rights: this is addressed in the article by Klunne, where lands used for fuel collection are being returned to large land owners for large sugar production.

Access to fuels: The article by Malhotra describes the difficulty that rural populations in India have in accessing kerosene and LPG, due to subsidies which favour the urban communities. Limited access to alternatives to fuelwood can often intensify the pressure on local forestry resources.

Access to improved technologies: The main barrier to accessing improved or renewable energy technologies is the initial cost. Even if the day-to-day cost of the energy supply is cheaper, the cost of the technology may be too great for many people in poor communities.

Economic conditions of target group: While the affected group may be fully aware of the erosion of their environment, and the increasing difficulties in accessing fuels, many are not in a position to address the problem due to lack of economic stability.

Below is a brief list of some possible solutions to the environmental dilemmas of household energy:

· Optimum use of waste materials as a fuel, while ensuring higher combustion efficiency

· Implementation of renewable technologies, such as biogas for cooking or solar power for water heating and lighting

· Appropriate government policies, which take a win-win approach to both the environment and the provision of household energy. 6