Is urban forestry a solution to the energy crisis of Sahelian cities?

The term 'urban forestry' indicates the simple fact that people purposefully plant and maintain trees amid their urban surroundings. However, urban forestry is by no means unique to developing countries; in fact, it is common for most regions of the world. The reasons for planting trees along roads, in public squares and private gardens are many:

· tangible reasons; such as food-production and fuelwood supplies

· intangible reasons; for recreation, to improve the quality of air, and to look attractive.

This article limits its scope to the Sahel region in the northern half of the African continent, so the role of urban forestry in industrialized Western countries has not been considered.

Urbanization as a characteristic trait of developing countries

There is no doubt that increasing urbanization is a characteristic for most developing countries.

Growth rate in the amount of urbanized land in Africa (4.4 ) is almost twice as high as it is world wide (Figure 1).

People who abandon their rural lives in order to move to fast-growing cities, normally have high hopes for a better life; food, employment opportunities and higher wages, energy etc. In most cases, though, this remains a dream, and a considerable number of people have insufficient access to these goods, services and advanced energy supplies such as gas, kerosene, and electricity. A large number of people remain dependent on subsistence food supplies, fuelwood or charcoal, and traditional cooking devices. Urban forestry can help to solve some of these problems.

This way, the consumption of fuelwood and/or charcoal by private urban households is closely linked with the level of development. This leads us to the question of which factors determine specific patterns of urban households' energy consumption. 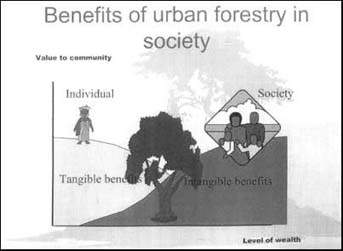 Benefits of urban forestry in society

Several factors, both physical and socio-economic, have been examined to determine private households' energy consumption patterns. Among these factors are 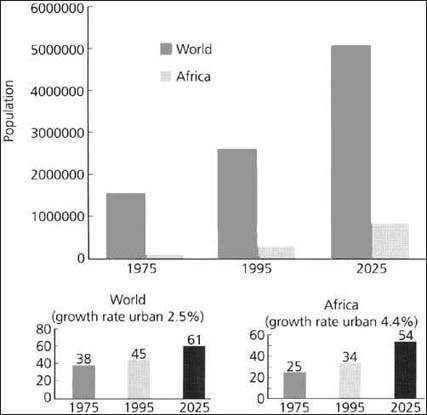 An important factor for urban citizens' preference for one energy source or another certainly is the price they have to pay on the market. Figure 2 compares the prices for electricity, kerosene, butane, fuelwood, and charcoal in Senegal. Not surprisingly, the latter two are by far the cheapest energy sources, while electricity is the most expensive.

While electricity may be most people's choice as a convenient source of energy, it requires a considerably developed and properly maintained public infrastructure, which - in most cases -is either not available, or too expensive for the average household. Many people have to rely on kerosene, and butane as alternatives to fuelwood and charcoal.

Since energy consumption patterns are closely linked to the level of development, one should expect that with the average household's income rising, the use of fuelwood and charcoal would be immediately reduced. In reality, this is usually not true as initially most people do not shift to more convenient (though more expensive) sources of energy; instead, they simply use more energy.

This behaviour becomes more evident where large price differences exist between 'modern' expensive energy sources and traditionally cheap energy sources, such as fuel-wood and charcoal. Besides, no new equipment has to be bought. Exploitation of forest resources will be the inevitable consequence.

Only when the average household's income increases so far that buying a new stove, gas burner or electric installation becomes a realistic option, people will shift to gas or electricity. The use of fuelwood and charcoal will then drop quite sharply, and will remain stabilized at a comparatively low level afterwards.

Urban forestry's contribution to the solution of Sahelian energy problems

Having addressed some of the prime reasons for urban households' energy consumption, we have to ask what conclusions may be drawn and how urban forestry's future role in Sahelian cities may be defined.

Figure 3: Potential of forest energy production as a function of rainfall

As urbanization continues, the demand for energy will continue to increases rapidly, due to the sheer number of inhabitants, especially if their standards of living improve. Successful development will - in the long run -induce energy substitution and will thus reduce the pressure on forests, not only in the vicinity of cities but also in rural supply areas.

However, many poverty-stricken people are likely to remain dependent on fuelwood and charcoal as a prime source of energy over the next decade. As has been stated in the previous section, the process of changing the energy consumption pattern will start with a significantly increased demand for traditional, 'cheap' energy sources. Exploitation of urban forests and of woodlands in the vicinity of major Sahelian cities, as well as in some rural supplier areas, is a likely outcome and may aggravate the already grave erosion and desertification problems, besides jeopardizing urban forestry's intangible benefits.

Strategies to limit this energy and environmental crisis comprise an increase in forest production as well as a reduction of fuel-wood/charcoal consumption. Looked at in the short term, dissemination of energy-saving technology might be the best bet, as it helps people to use forest energy both effectively and efficiently and has an immediate impact. However, it is also clear that increasing the Sahelian forest production will remain an important and justified effort. This has been tried with varying success through large-scale afforestation, social/community forestry measures, and natural forests management. In the field of urban forestry very little information on its potential for fuelwood supply is available. However, one limiting factor is certainly the availability of suitable land. A rough estimate of the magnitude of a possible impact is made on the basis of the potential for forest production: Figure 3 shows the wood production of the fast growing eucalyptus tree compared with natural tree savannah for different amounts of rainfall.

If we take eucalyptus as the more productive alternative (although in reality certain species which respond better in urban areas would be chosen) it is possible to compare the theoretical wood production with the energy consumption in different Sahelian cities. For each of the five major Sahelian cities noted in Figure 4, if they have at their - disposal an urban plantation of 300 hectares (corresponding to 187,500 trees), it can be seen that for the rainfall available in those regions, only 200 to 1500 citizens could be sustainably supplied with fuelwood.

Figure 4: Area of trees necessary to supply one person with forest energy sustainably

These findings lead to the following conclusions:

Urban forestry is important if one considers the many positive impacts, but alone it cannot significantly contribute to mitigate the energy crises in Sahelian cities. The only possible option to improve the situation is to apply a holistic approach. This comprises such elements as support of different forest production systems, dissemination of fuelwood saving devices, fuelwood substitution, awareness creation and a favourable political and institutional framework. Such an approach has to include social, cultural, economic and technical aspects. It has to be flexible and adapted to local conditions. As part of such an approach, urban forestry can play an important role.