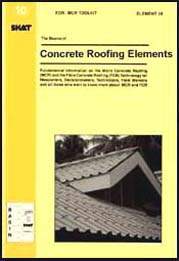 What is MCR and FCR?

MCR and FCR are building materials which have been developed for the covering of roofs, in advanced and low cost building construction.

MCR/FCR Elements are made of concrete which is a mixture of sand, cement, water and eventually with natural or artificial fibres.

These Elements can be produced either as tiles, sheets or semi-sheets, in small decentralized plants.

Since the roofing elements are produced manually, many jobs for men and women - can be created in rural and urban areas.

Between 1977 and 1984 FCR sheet technology failed in many cases, mainly because of insufficient training of the producers and bad roof substructures. The solution to these problems has been the development of tile and recently semi-sheet production as well as improved know-how transfer. While the tile production and application has grown and spread all over the world, sheet production continued successfully only at selected places and further dissemination remained limited.

Though the technology has reached a satisfactory state already, further research and development is still needed. The members of the Roofing Advisory Service of SKAT, the main suppliers of equipment and many MCR and FCR practitioners in the field are continuously improving the equipment and the production methods. The main efforts of the Roofing Advisory Service are heading towards research in raw materials, the role of the fibre and optimizing the size and the shape of the elements, as well as the development of tools for better management, of quality control and marketing. Last but not least the development of new elements which require less timber for the supporting structure will be a need for the future.