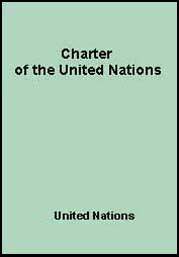 Members of the United Nations which have or assume responsibilities for the administration of territories whose peoples have not yet attained a full measure of self-government recognize the principle that the interests of the inhabitants of these territories are paramount, and accept as a sacred trust the obligation to promote to the utmost, within the system of international peace and security established by the present Charter, the well-being of the inhabitants of these territories, and, to this end:

a. to ensure, with due respect for the culture of the peoples concerned, their political, economic, social, and educational advancement, their just treatment, and their protection against abuses;

b. to develop self-government, to take due account of the political aspirations of the peoples, and to assist them in the progressive development of their free political institutions, according to the particular circumstances of each territory and its peoples and their varying stages of advancement;

d. to promote constructive measures of development, to encourage research, and to cooperate with one another and, when and where appropriate, with specialized international bodies with a view to the practical achievement of the social, economic, and scientific purposes set forth in this Article; and

e. to transmit regularly to the Secretary - General for information purposes, subject to such limitation as security and constitutional considerations may require, statistical and other information of a technical nature relating to economic, social, and educational conditions in the territories for which they are respectively responsible other than those territories to which Chapter XII and XIII apply.

Members of the United Nations also agree that their policy in respect of the territories to which this Chapter applies, no less than in respect of their metropolitan areas, must be based on the general principle of good-neighborliness, due account being taken of the interests and well-being of the rest of the world, in social, economic, and commercial matters.