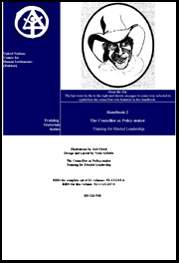 This handbook, The Councillor as Policy-maker, is one of the series of 12 and is intended for use primarily by trainers in national training institutions for local government or training units within local governments themselves. As an additional assistance for trainers using these handbooks, the United Nations Centre for Human Settlements (Habitat) has published a companion Trainer's Guide for Training of Elected Officials containing trainer's notes and information prepared exclusively for the benefit of these trainers in planning workshops for local elected officials based on the Councillor as handbooks.

I wish to thank Dr. Fred Fisher and Mr. David W. Tees for preparing this and other handbooks in the series in collaboration with the staff of the United Nations Centre for Human Settlements (Habitat) Training Section within the Centre's training programmes supported by the Government of the Netherlands. I also wish to acknowledge the contribution of the trainers and local-government officials in Costa Rica, El Salvador, Kenya, Lithuania, Romania and Uganda who assisted in the field-testing of these training materials.