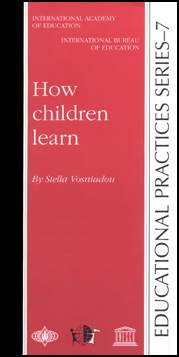 Sometimes existing knowledge can stand in the way of understanding new information. While this is often the case in the learning of science and mathematics, it can apply to all subject-matter areas. It happens because our current understanding of the physical and social world, of history, of theorizing about numbers, etc., is the product of thousands of years of cultural activity that has radically changed intuitive ways of explaining phenomena. For example, in the area of mathematics, many children make mistakes when they use fractions because they use rules that apply to natural numbers only. Similarly, in the physical sciences, students form various misconceptions. The idea that the Earth is round like a pancake or like a sphere flattened on the top happens because it reconciles the scientific information that the Earth is round, with the intuitive belief that it is flat and that people live upon its top. Such misconceptions do not apply only in young children. They are common in high school and college students as well.

What can teachers do to facilitate the understanding of counterintuitive information?

· Teachers need to be aware that students have prior beliefs and incomplete understandings that can conflict with what is being taught at school.

· It is important to create the circumstances where alternative beliefs and explanations can be externalized and expressed.

· Teachers need to build on the existing ideas of students and slowly lead them to more mature understandings. Ignoring prior beliefs can lead to the formation of misconceptions.

· Students must be provided with observations and experiments that have the potential of showing to them that some of their beliefs can be wrong. Examples from the history of science can be used for this purpose.

· Scientific explanations must be presented with clarity and, when possible, exemplified with models.

· Students must be given enough time to restructure their prior conceptions. In order to do this, it is better to design curricula that deal with fewer topics in greater depth than attempting to cover a great deal of topics in a superficial manner.