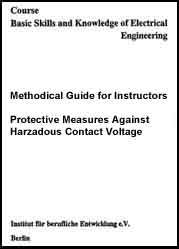 3.3. Examples for Recapitulation and Tests

For consolidating and testing the knowledge and skills acquired, questions are composed in this section.

To each question the respective answer is given.

Questions contained in the "Trainees' Handbook of Lessons" are marked with the letter "A".

1. What is the aim and purpose of protective measures?
(Protection of human life, health and ability to work)

2. Why is it necessary to take protective measures even if cables, electrical devices and plants are sufficiently insulated?
"A" (Natural ageing, destruction due to inexpert use, premature ageing by climatic influences and chemical effects may lead to dielectric breakdowns that make conductive parts alive.)

3. Why must the potential equalization not be broken when certain parts are removed?
(Because in this case a potential may be created which, when bridged by the body, may cause a mortal current flow.)

4. How can a potential equalization to zero potential be achieved?
"A" (When all metallic parts, such as water pipes, gas mains, central heating, metallic sheathings of cables and other metal constructions, are connected with one another and with the ground in a conductive way.)

6. Where is the protective insulation preferabely used?
"A" (household appliances/except thermal appliances, cosmetic and massage as well as do-it-yourself equipment.)

7. Where is the protective low voltage used?
"A" (Electrical toys, cosmetic and massage appliances without protective insulation, inspection lamps and electrical tools for boiler and large pipe systems, vibrating devices.)

8. Where is the protective isolation used?
"A" (In all plants and pans of plants in which especially great danger may be evoked by contact with large metallic constructions, furthermore, for operating physiotherapeutical equipment for medical purposes as well as for shaving sockets in washrooms of passenger trains.)

9. Where is the protective conductor system used?
"A" (In factories where the failure of one machine leads to a disturbance of the entire manufacturing process; with electrical plants in operating theatres; in miming.)

10. What value must the test resistance of a protective conductor system have with a mains voltage of 220 V?
"A" (5.5 kiloohms)

11. Where is the protective earthling used?
"A" (Mainly in all nets which cannot be connected to neutral.)

12. Why can the protective earthling give a limited protection only?
(Because the earth transistor resistance - due to climatic influences - is subject to fluctuation; because the required earthling resistances are difficult to achieve; because the single-pole switching-off of three-phase current consumers may cause defects at these consumers.)

13. Where is the connection to neutral used?
"A" (In all nets with sufficiently earthed neutral conductor/zero conductor; because of the simple and cheap application in all fields of electric current.)

14. Why does the protective measure of "connection to neutral" become inefficient if a too strong fuse is connected before?
(The defective external conductor does not switch off quickly enough so that the fault voltage remains at the defective equipment.)

16. Where is the fault-current protective system used?
"A" (It can be installed in all electrical plants with three-phase or alternating current and can be combined with the protective measure of "connection to neutral".)

17. Where is the isolating fault-current protective system used?
"A" (Mainly in ship building.)