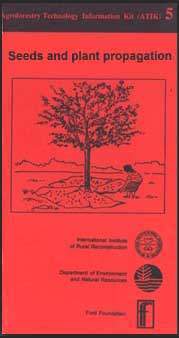 The value of a seedlot depends on its authenticity or "trueness-to-type", germination capacity. general health and ability to withstand stresses in the field and during storage. To a large extent, selection of mother trees, of fruits in the tree and the technique and timing of seed collection determines the quality of harvested seeds. To assure e good quality seedlot, seed collection Ups should be observed.

Survey the area for potential mother trees. A good mother tree should be vigorous, healthy, with abundant and healthy fruits and of good growth and form representing the purpose for which it is grown (i.e., for timber, fodder or fruit). Collect only from mature and healthy trees. Avoid very young trees or plants.

Also, avoid choosing an area where only few trees of the same species grow, especially if they are naturally cross pollinating. A large population gives a better chance of selecting good mother trees. Avoid collecting in stands with numerous poorly-formed, off-colored, abnormal o_r disease-infected trees. Collect fruits/seeds from trees standing in the center of the field. Make sure that seeds come from many trees of the same kind and quality to ensure that the seedlot contains all the representative characteristics of the variety.

Collecting fruits/seeds from the ground is common especially for large-fruited species or species with seeds that are naturally dispersed. Although convenient, this practice increases the risk of collecting immature, empty, decayed/deteriorated and sprouted/germinated seeds. Identifying the source of seeds (mother trees) would also be difficult, especially when crowns of trees are interlocking.

Some points to consider in collecting fruits/seeds from the ground:

· Gather sound fruits and seeds right after they have fallen. Avoid collecting first fruits that fall during the season as they are often of poor quality.

· Shedding of mature fruits/seeds may be induced by shaking the trunks of small trees. Long poles, aided by hooks and ropes, could be used for taller trees. Lay a mat on the ground to avoid seeds from touching the ground and to facilitate collection.

Examples of seeds that can be collected from the ground:

Special skills and support equipment (like ladders, climbing iron with spikes, safety belts) are needed to access fruits from higher parts of the tree.

3. From crowns of felled trees

Collection of seeds from felled trees is easier and usually a lot quicker. However, this should be avoided as much as possible since this could lead to significant reduction in tree population and expose the soil to erosion.

1. Collect fruits/seeds at about mid-moming or midafternoon when it is sunny and not windy. This avoids pod shattering or obtaining pods or seeds that are moist with dew.

2. Harvest fruits/seeds only from trees where most of the fruits are mature (i.e., avoid overmature and immature ones). Do not collect seeds from fruits that flowered early or late.

3. To know when a fruit or seed is mature requires familiarity with the species. Some common indices of maturity are changes in size, texture and color (usually from green to various shades of yellow, red, purple, brown or black). Certain fruits dry up while others become soft and sometimes aromatic when ripe. Collect seeds from shattering fruits, cones or pods (e.g., pine, eucalyptus, ipil-ipil Leucaena spp., agoho, Moluccan sau, banaba, Acacia mangium, akle Serialbizia acle and Sesbania) before they dry up and shed or when still greenish or yellowish in color. Maturity of those with closed cones or fruits, e.g., Gmelina, can be assessed better by cutting through and examining the fruit. Collection of green or yellow fruits would also minimize fermentation during temporary storage of unextracted seeds.

Mark mother trees for future collection. Record the site, location of trees within site and date of collection. This will serve as reference in evaluating performance of seedlots in relation to origin and seed source (provenance) as well as predicting seed longevity.

Note: Prepared by Remedios Evangelista of the DENR. More information on the collection schedule and on the occurrence of species, including other common or local names, can be found in Agroforestry Seeds Circular Supplement (June 1991 and January 1992 issues). The materials include about 300 species.