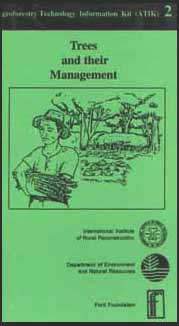 Shelterbelts or windbreaks are strips of vegetation composed of trees, shrubs and vines to protect croplands from destructive winds. When established on hills, they can also act as buffer strips to minimize soil erosion. Along rivers, streams or creeks, they serve as a bank protection along farm borders, they serve as live fence and firebreaks. Shelterbelts also serve as source of agroforestry products.

Shelterbelts/windbreaks are recommended particularly in the eastern portion and other areas in the country frequently visited by typhoons.

Properly established shelterbelts should be dense in their lower part and more open in the middle and upper parts. The vegetative mixture of a good shelterbelt is approximately 65 percent shrubs and vines and 35 percent tall and medium-sized trees.

CHARACTERlSTlCS OF SPECIES FOR SHELTERBELTS

In choosing species to be used in shelterbelts, the following should be considered:

1. The species should be wind-resistant.
2. It must have a deep and well-spread root system.
3. It must have a small crown and light branching habit.
4. Easy to propagate and maintain.
5. Ability to coppice.
6. Can provide other economic benefits, like food, fodder, etc.

2. The number of rows in the strips largely depends on the velocity of the wind. The higher the velocity, the broader the strip. Usually, the strip for shelterbelts is 1-5 rows.

3. The first and the last rows should be planted mainly to shrubs and the central rows, a combination of tall and medium-sized trees planted in small clusters of 2-5 plants of the same species.

4. Use the quincunx (triangular) method at 1 m distance between tree/shrubs.

5. In areas with high wind velocity, the shelterbelts should be about 100 m apart and about 200-300 meters in ordinary conditions