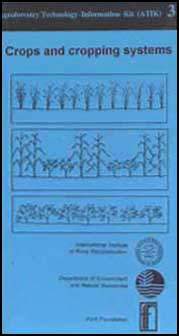 Crop production has traditionally been the most important land use, source of sustenance and livelihood in the lowlands. Perhaps, crops also constitute the most dominant component in most of our upland farms.

Through the years, upland farmers have evolved various crop production practices out of actual experiences and experimentation over diverse farm conditions and situations. In time, they have developed various systems in coping with their farm resources and the farm environment.

Multiple cropping, or the practice of growing several crops on the same piece of land, is one of the oldest crop production strategies among upland farmers. Aside from promoting farm diversity, both in terms of plant stock and products, it has proven to enhance farm stability and efficiency in the use of land and labor. It is also considered to be the best alternative to monocropping (the practice of growing only one crop per year).

The crops or cropping pattern can vary from year to year, or follow an arrangement for a certain number of years after which some changes are made. This is commonly referred to as crop rotation.

The wide diversity of crop species that can adapt to the varying environment conditions in the uplands has allowed farmers to practice multiple cropping in various ways. Given the dimensions of time and space in a farm and the varying crop life cycles and growth habits, farmers follow cropping patterns of different designs

The simplest multiple cropping pattern is sequential cropping, or the growing of two or more crops in succession within the one-year growing period. In this pattern, the following crop is planted only after the preceding crop is harvested (Figure 1). Since there are a lot of annual crops with very short maturity, three to four crops can be grown and harvested with this pattern in one year.

Intercropping, or the growing of two or more crops simultaneously on the same field, is a more complicated cropping pattern but is probably the most common in upland farming. This practice allows for mixing annual crops, annual plus perennial crops, or mixed perennials either in random or row arrangement over the farm area (Figure 2). Certainly with this pattern, there will be growth overlaps among the crops that can make management a little complicated. A special option for growing two or more annual crops simultaneously on the same field with the following crop planted after the preceding crop has flowered is the practice of relay cropping (Figure 3).

As a farmer follows a cropping pattern, he also has to devise and organize his crop production practices and management activities. In most cases, cropping patterns are determined by given big-physical factors and the available resources that can be managed. Over and above these considerations, however, the farmer's goal and objective can be the ultimate determinant.

The fact that the cropping system is only part of the whole farm, as in the context of an agroforestry farm, should, therefore, always be considered in appreciating and understanding the various technological options.