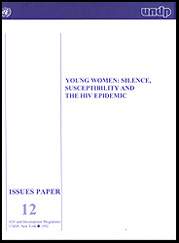 Age as an independent variable for hiv infection

These data sets dramatically indicate that the patterns are everywhere and over time similar:

· the prevalence of HIV infection is highest in young women aged 15 to 25 and peaks in men five to ten years later in the 25 to 35 age groups; and

· among women, the infection profile by age has a precipitous peak in the age group 15 to 20 and declines for older pre-menopausal age groups.

Figure 2 : Thailand – Age and gender disaggregation of rates of HIV infection cumulative to 1990

Figure 4 : Uganda - Age and gender disaggregation of people diagnosed with AIDS (to June 1991)

Other studies8,9,10 are providing dramatic illustration of the vulnerability of young women when they become sexually active early in life. Anne Chao's data from Rwanda (Figure 6) show that the younger the age of first pregnancy or first sexual intercourse the higher the incidence of HIV infection: over 25 per cent of young women pregnant at age 17 or younger are infected and about 17 per cent of those 17 or younger at first sexual intercourse are infected. Infection rates decrease sharply in both categories in later age groups.

It is our contention that the extent of HIV infection in young girls in their teens or early twenties shown in these data sets will be affected by all the contributory factors currently identified in the literature as increasing the rates of infection in women and men but cannot be adequately accounted for by these factors, even in the aggregate. In the case of young women there would seem to be other influential factors. These need to be identified.

The factors identified in the literature include the incidence of sexually transmitted infections (STIs)11,12, frequency of intercourse13, sexual practices14, and male/female age differences in sexual relationships15,16. To these may also be added women's nutritional status17, and the presence of lesions, inflammation and scarification in the female genital tract from causes other than STIs18 as well as women's socio-economic status16.

These factors may well be contributing factors but cannot be the complete explanation. Individually they are as true or more true of older, pre-menopausal women or young men in the same age group. However, these groups do not exhibit the same extent of infection. Frequency of intercourse is not adequate as an explanatory variable since young women have become infected with HIV during their first act of intercourse19 and with infrequent sexual activity20. Infected young women have not been shown to be more sexually active than uninfected young women in their age group, than older women or than young men20.

Similarly, sexual practices which cause lesions or inflammations of the genital tract are not usually practised by young women. These are more prevalent after the birth of the first child21.

Nutritional status is not a sufficient variable since it is poor in all women of childbearing age. Furthermore, the social and economic conditions through which women enter sex work apply as much or more to women in the age group 20 to 29 as in the age group 10 to 19.

When social explanations are offered for this pattern of high infection rates in young women, they are usually offered in terms of older men having sexual intercourse, consensually or otherwise, with younger women15. Whilst this and all the above are clearly contributory factors, we contend that they are insufficient, even in the aggregate, to explain the steepness of the infection profile in girls and young women.