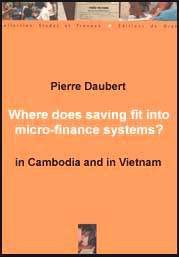 I - Economic and financial policies

Micro-finance (M-F) systems evolve in some respects on the fringe of financial policies. They are regarded above all as responses to situations of poverty, at best as development tools.

Having said this, as they expand and as their role is recognized as a result, they are gradually being considered from a more financial viewpoint. Today, a growing number of practitioners and analysts consider that such systems have a genuine role to play in national financial mechanisms.

It is therefore not irrelevant, before embarking on the issue itself, to briefly consider the macroeconomic and institutional contexts in which M-F systems are evolving. We will see for example that in the case of Cambodia, where there is no agricultural development bank, the government is choosing to promote the decentralized credit network which is forming. In these conditions, one can speculate that the authorities are particularly keen that the regulation which will be applied to its operation should be consistent with the country's economic development policy.

Asia has been referred to in terms of an economic miracle. Publications have scrutinized the reasons for these successes and it is not our intention here to go over these again. It is, however, of interest to our subject to outline the main tendencies of the monetary and financial policies which have contributed to the development of the countries of Asia.

What lessons can be learnt from the experience of East Asia? The World Bank report entitled The miracle of East Asia summarizes them as follows :

" Without a high level of internal savings, without a widely distributed human capital resource, without good macro-economic management and without limitation of price distortions, growth would have lacked a base and it would have been impossible to materialise the advantages and the rapid increase in productivity. The policies followed to help the financial sector to tap non-financial savings and to increase household and enterprise savings played an essential part. "

For the most part growth in these countries could be explained by a higher rate of accrual. It is private internal investment which, together with a rapidly growing human capital resource, have been the main driving forces of growth. High levels of internal financial savings have generated high levels of investment.

Certain governments have indeed not hesitated to use various instruments of an interventionist nature to increase savings. Malaysia and Singapore have even devised a system of compulsory saving, by obliging salaried workers to subscribe to contingency schemes.

The economy in general has benefited from the high yield of savings - obligatory or otherwise. This is a very important point at macro-economic level. Mobilizing savings is not enough. In other economies, particularly in the republics of the former Soviet Union, where saving has been made obligatory, high yield investment rates have not been achieved.

The report goes on: "The prudence which public policies displayed in budgetary matters also helped to reduce the necessity of borrowing abroad and the favorable side-effects of their other policies have enabled countries such as Indonesia, Korea, Malaysia and Thailand to cope with their level of debt better than other developing economies. "

Another fundamental factor in the success of the development policies has resided in their capacity to contain the rise in prices. By doing so, these policies have enabled the volatility of real rates of interest paid on deposits to be avoided and resulted in these rates remaining largely positive. "The stability of interest rates is apparent in an average standard deviation of 3.5, close to the average of 2.8 which is that of the OECD, whereas the average standard deviation was 40 in Latin America and 14 in sub-Saharan Africa. "

Selective state interventions were used to support to the main trends. Amongst these, we might mention in respect of countries such as Thailand and Malaysia the practice of so-called financial repression, through which certain governments have held credit and debit rates below the level of equilibrium of the market.

The three countries of the Indochinese peninsula are barely emerging from their collectivist impasse. At the same time they are breaking down their isolation vis a vis the countries which form their immediate environment.

Following the example of China, economic openings in Vietnam and in Laos did not take the form of political liberalisation. The liberal evolution has, however, been very marked. Progress has been made in successive stages, with the year 1989 marking an important turning point.

In Cambodia the political reversal was more clear-cut than in Vietnam. The opening out which followed took concrete form in 1991 with the peace accords.

The economies of these countries have suffered, over and above political choices which proved disastrous, from the persistence of a war context (Cambodia and Vietnam). Cambodia is still grappling with a tenacious guerrilla movement and the war effort which the country is obliged to make weighs heavy in the State budget. As for Vietnam, it has had to shoulder the burden of its engagement in Cambodia until 1988. Only Laos has not experienced war since 1975.

It is therefore difficult to compare the economies of these countries with those of other Marxist countries. Certainly, factories and land were nationalized, and work was made collective, but all in a very particular context of reconstruction and of sustained war effort.

The case of Cambodia is of course an extreme one from all points of view. Collectivism was pushed there to probably unknown limits. The currency was abolished in 1975, the central bank dynamited, and it is only fifteen years ago that the currency was reintroduced. The four years of Khmer Rouge reign ruined the country.

The banking sector is changing rapidly. It was only in the early 90s that foreign banks were really able to install themselves in these countries. In Vietnam, there are four commercial State banks, three joint-venture banks and nine foreign banks.

The banking sector still has relatively little influence from an economic point of view, especially in Cambodia. Their role of intermediation and we have seen other a propos Asian countries the extent to which this predominated based on a high mobilization of savings - is still extremely restricted. The banks mobilize only a derisory proportion of internal savings. In Cambodia, the State controls only a small fraction of the money supply. Most payments of large sums are made in dollars or in gold.

Investment is still low, probably amounting to 12% of the GDP in Vietnam, which is far below the 20 to 30% of the other Asian countries. Investments are largely financed by foreign capital. The effects of monetary generation on inflation are slightly attenuated by the fast and strong growth of these countries. Inflation levels remain reasonable, although the risks of overheating have not been eliminated.

The situations of these countries are thus marked by reconstruction and development. Financing comes essentially from outside. Confidence in the existing regimes, in the political future and in the currencies is too low, and family savings capacity too limited for any national savings to be able to take over from foreign capital. The barely emerging banking sector is not yet capable of playing its role of intermediation in this context.

The financial systems set up after independence have on the whole continued on from those of the colonial structure.

In the 60s, the prevailing doctrine in monetary matters was Keynesian. This was indeed the case even before the countries' independence. It was generally believed that development would follow on from policies of large-scale investment. National savings, however, being insufficient to finance these, this credit policy had to rely on recourse to external funding.

The banks - which were public - thus financed themselves thanks to the external debt of states which fell into the trap of an all too easy access to external funding. Times were characterized by the strong predominance of States and of public enterprises, a predominance which was reinforced by the external funding mechanism, channeled by State institutions. The domain of rural funding did not escape this overall model, highly marked by centralization.

In addition, giving credit to farmers being considered risky, a policy of fairly low interest rates was used, in reality negative real rates.

In the 70s, the heavy burden of external and internal debt led to a crisis within the financial system. The banking system ended up bankrupt:widespread dubious claims, lack of liquidity and insolvency characterized the banking world at the beginning of the 80s.

Amongst agricultural development banks, those which have been able to form and maintain themselves are few and far between, but include, however, Mali and Burkina Faso. Countries such as Guinea, Benin or the Ivory Coast still have no development banks to this day.

There are many reasons for this collapse. Over and above the failures of the financial system as a whole, the practices of the development banks have proved unsuited to the context: inadequate credit supply and demand, nepotism, sloppy management - all handicaps reinforced by a kind of culture gap between the rural, often illiterate clientele and a Westernised banking environment. It is partly as a result of this collapse, to which we will return later, that decentralised financial systems emerged.

The end of the 80s was marked by financial liberalisation in the banking sector. Today, in the zone aligned to the French franc, privatization has overall enabled the banking system to be rehabilitated - despite sometimes great diversity in circumstances. It has also considerably transformed the basic facts. From a situation dominated by the "easy credit" policy, today the logic of cost-effectiveness has taken over, forcing banks to carry out only low-risk operations. As a result, although they finance commercial credit or import-export credit fairly readily, they prove incapable of financing risk capital - despite in general having at present too much liquidity. To a certain extent, one can say that such investment needs are rather met from outside.

This raises particularly the problem of the banks' capacity for intermediation. As in other respects, the latter find themselves restricted in how much they can deposit with the and have to bear high management costs, and their margins of intermediation are amongst the highest in the world (the BCEAO's break-even is 9 points, whereas the normal break-even of a central bank is on the order of 3 points!. This results in the banking system malfunctioning.