Three Partners - All in One Boat 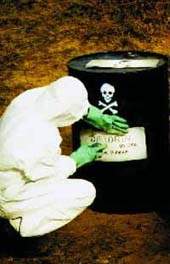 Toxic waste and obsolete pesticides do not just appear overnight. Nor are they the result of any one person’s error or misdeed. Thus, it is only logical for all concerned to cooperate in cleaning up the mess. Successful disposal measures are chiefly characterized by good cooperation between the various actors.

The Pesticide Disposal Project has initiated cooperation with and between a large number of partners, including various governments and nongovernmental organizations, international organizations and the private sector. The span of examples includes cooperation with USAID in the Niger and Morocco, with DANIDA in Mozambique, with Norway’s StrFoundation in Mali, and with the FAO in Ethiopia and Zambia. Shell International Ltd./UK is involved in Madagascar, the Niger and Mauritania, while BASF AG and Bayer AG are active in Mozambique and Pakistan, respectively.

The bottom-line experience has been positive. Since a number of development-cooperation organizations are simultaneously concerned with the pesticides problem, close cooperation is called for as a means of steering the exchange of data and experience. This can help avoid redundancy and, hence, unnecessary expense.

In this connection, GTZ is collaborating with the FAO, which has assumed a coordinating role. With the assistance of GTZ, the FAO’s expert panels have drawn up guidelines for surveys and directives for the disposal of pesticides in large and small quantities. Pesticide Disposal Project staff have represented BMZ at the FAO’s annual government consultations on pesticide disposal and prevention and have taken part in special missions (e.g., Task Force Ethiopia).

An inventory of obsolete pesticides in Africa and the Near East, including the names of products and producers, was published by the FAO in 1996. This caused something of a stir in the pesticides-producing industry, but it also got things going. The Global Crop Protection Federation (GCPF) announced to the FAO that it was prepared to provide both technical and financial assistance to any disposal measures involving products made by its member companies.

This was the result of a long learning process within the industry. As early as the 1970s, the multinational chemical concerns had already been pilloried for their pesticide trade practices with Third World countries. Their pledge to implement the International Code of Conduct on the Distribution and Use of Pesticides is one reaction to that.

The producers are already being held responsible for their products’ past. And in the future, they will have to assume even more responsibility, because more and more people all over the world are becoming aware of such things. Big environmentalist organizations like Greenpeace have also long since gone multinational. Wherever a company decides to do business nowadays, it can expect Greenpeace & Co. to be on the scene. The organization’s international network is very closely knit, and its informal ties with government agencies and supranational organizations are numerous.

Product responsibility accompanies each product through its entire life cycle, from the development, its production and sale to its consumption or disposal. Agenda 21 wants it that way, and the chemical industry has accepted it that way. The key term is Responsible Care, i.e., a global initiative devoted to the promotion of responsible behavior on the part of producers. 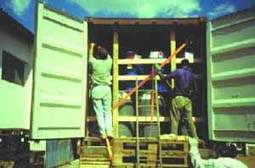 Mozambique: Return to sender - a joint operation together with the pesticide producer.

This initiative endeavors to achieve gradual improvement in matters of health, safety and ecology. Responsible Care therefore accompanies a given product not only through its entire life cycle, but also applies to the internal and external communication of any relevant activities.

This is a point of departure for cooperation in cases where the idea is to help - actively as well as financially - eliminate yesterday’s environmental burdens or to implement strategies that will prevent new burdens before they ever occur. While most companies still showed little interest in such things during the 1980s, most of them are now willing to cooperate.

GTZ has had some favorable experiences in connection with cooperative forms of disposal. Time and again there were large amounts of dieldrin to be disposed of, and Shell International Ltd. was once the sole manufacturer of that pesticide. While the company did discontinue its production and sale during the 1980s, it nevertheless has provided both know-how and funding for projects in the Niger, Madagascar and Mauritania - all in the sense of responsible care.

Such active involvement is rendered all the more interesting by the fact that Shell sold its entire pesticides business in the early 1990s and has not even been a member of the pesticide producers’ association GCPF since that time. As a former producer, however, Shell does still cooperate with GCPF whenever there is a real need for responsible-care action.

Such cases could become increasingly frequent. According to Shell’s own estimates, developing nations still have more than 1,000 tons of dieldrin in store. Shell, however, has undertaken to cooperate with qualified organizations in safely disposing of all remaining stocks of the erstwhile best seller in Third World countries.

GTZ has had positive experiences with other companies, too: in Pakistan, for example, from where there came an inquiry about how to dispose of some 60 tons of gusathion in Peshawar. Pakistani authorities purchased the pesticide about 20 years ago. The first leaky drums were replaced about a decade ago.

While the solution had been transferred from its original drums to new ones, no labels had been added or transferred, so it was no longer possible to clearly identify the manufacturer. Soon after that, the gusathion began to decompose, and the drums came close to bursting. An awful stench emanated from the storage site, wafting over into a densely populated part of Peshawar. The local authorities requested GTZ assistance. Since the Pesticide Disposal Project was able to provide know-how but no funding, it appeared logical to contact the original patent holder.

Bayer AG affirmed its willingness to collaborate with GTZ. Even if it should turn out that the pesticide was not a Bayer product, the company nevertheless wanted to help alleviate the acute hazard. Moreover, GTZ and Bayer had already accumulated some common experience in the form of pretrials for the DNOC disposal scheme. In the meantime, the gusathion has been filled into new shipping containers and will soon be taken to England for disposal.

Seventy-three tons of formulating additives and agro-chemicals from an erstwhile BASF production facility in Mozambique were also successfully disposed of. BASF AG burned the waste at its own cost in a hazardous waste incinerator at the BASF plant in Ludwigshafen.

Thus, coming to terms with the past sometimes even provides impetus for shaping a better future. The money that GTZ saved through the industry’s involvement is working to Pakistan’s benefit, i.e., the funds are being used to pay for preventive measures: pesticide management is being improved, and some weak points of storage and handling eliminated. This amounts to a major contribution toward the future avoidance of new baseline pollution. 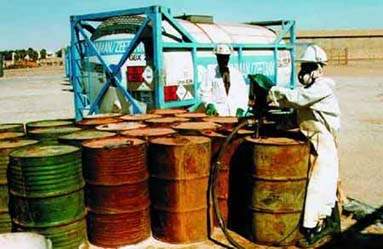 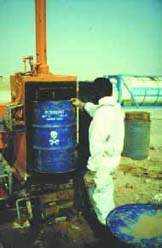 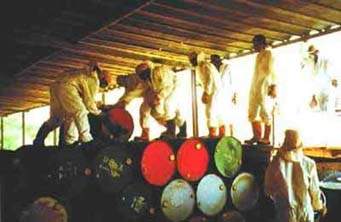 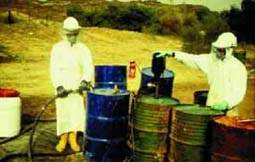