Following a lengthy period of devastation, Uganda is now rebuilding, with healthy but fluctuating economic growth rates. The cash economy is heavily dependent on coffee, while the population is sustained mainly on subsistence agriculture.

All figures are from UNAIDS country profile for Uganda, August 1997.

According to the latest population figures, 16% of Uganda’s 20 million people are Muslim (compared to Catholic 33%, Protestant 33%, and indigenous beliefs 18%). Muslim leaders feel this number is an underestimate and cite figures between 20% and 30% of the population.

The central organizing body of the Muslim community is the Uganda Muslim Supreme Council, headed by His Eminence the Mufti. Under the Mufti, there are 33 district religious leaders called District Khadis. Under each District Khadi there are approximately six County Sheikhs. Each County Sheikh oversees 30 to 40 Imams, each of whom heads a mosque. Every Imam is the spiritual leader for approximately 75 families.

There are certain traditional Muslim practices that have the potential to increase the risk of exposure to the HIV virus. These practices include male circumcision (as sometimes practised in the rural areas with one unsterilized razor being used for several infants), ablution of the dead (if individuals fail to use protective gloves when cleaning bodily orifices) and possibly polygamy (although there is currently no evidence associating polygamy with increased risk of HIV). 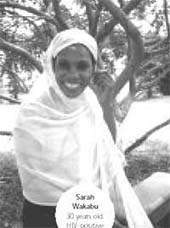 The Joint United Nations Programme on HIV/AIDS (UNAIDS) reports that over 30 million adults and children worldwide are believed to be living with HIV infection - 1 in every 100 sexually active adults. If current transmission rates hold steady, by the year 2000 the number of people living with HIV/AIDS will soar to 40 million.

UNAIDS estimates that 2.3 million people died of AIDS in 1997, a 50% increase over 1996. Nearly half of those deaths were in women and 460,000 were in children under 15. In most parts of the world, the majority of new infections are in children and young people between the ages of 15 and 24.

Since the beginning of the epidemic, 3.8 million children under the age of 15 are estimated to have become infected with HIV and 2.7 million to have died. Over 90% of these children acquired the virus through their HIV-positive mothers, whether before or during birth or through breast feeding. So far, more than 8 million children have lost their mothers to AIDS when they were less than 15 years old - and many of these also lost their fathers. It is estimated that this figure will almost double by the year 2000.