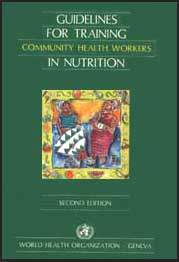 Beliefs and practices about foods in pregnancy and lactation

There are many beliefs and practices about pregnancy in different cultures. Some of these concern the relationship between what the mother eats and how the child will develop. The eating of certain foods is believed to affect characteristics of the child: brave or cowardly, beautiful or ugly, generous or selfish, etc. There is no scientific evidence for these beliefs. However, in order to be able to advise mothers, it is important to understand the beliefs of mothers about various foods.

In many countries mothers believe that if they eat too much the baby will grow too big. They think that the big baby will cause a long' painful and difficult delivery. This is not true and it is a harmful belief. Even if mothers eat a lot, the baby will not grow larger than a certain size. If a mother eats well, both she and her baby will be strong and healthy at the time of delivery.

There are also special beliefs and practices about diet and breast milk in different cultures. If a mother eats certain foods it is believed that her milk may be spoilt or unsuitable for her child. Other foods are believed to increase the flow of milk.

The community health worker needs to know about all the beliefs and practices concerning food. Inquiries should be made from grandmothers and older women in the community. Customs that favour better nutrition should be encouraged and promoted when teaching about appropriate diets. Customs that are bad have to be tactfully discouraged.

Nutrition and health during pregnancy and lactation

A woman remains pregnant for about 280 days. During this time a tiny fertilized cell grows into a fully-formed, 3-kilogram baby inside the mother's womb. The raw materials required for this growth come from the mother's diet. Therefore, during the pregnancy the mother needs much extra food so that the baby becomes strong and healthy. The mother's diet should include all the nutrients needed for the baby to grow well. This means that a mother needs not only extra food, but also certain types of food. These will be discussed in the section entitled 'A good diet for pregnancy and lactation' below.

Mothers who do not have enough food during pregnancy have smaller babies. Such babies have a low birth-weight. They may weigh less than 2500 grams (2.5 kg) and if so are already malnourished. There are more illnesses and deaths among small babies than among larger, normal-sized babies. Low-birthweight babies are especially at risk of becoming more malnourished. Therefore, it is important for pregnant women to have enough food.

If a mother has a good diet with enough energy-giving foods during pregnancy, she becomes heavier and puts on fat. Her abdomen enlarges because her womb becomes bigger with the growing baby inside. Her breasts enlarge and get ready to produce milk. She collects a layer of fat under the skin. This is important because it is this stored fat that is used to make much of the milk in the months when she is breast-feeding. If she does not have enough food when she is pregnant, she will not store enough fat, and if she does not have enough fat she will not produce enough milk. This is particularly important for women who are initially small.

The diet of a woman when she is breast-feeding her child is also important. The food a mother eats is partly turned into breast milk. If she does not eat enough food, or does not eat foods with the right nutrients, she will have less milk. A mother makes 500 750 ml of milk per day. This depends on a regular supply of food. If a mother continues to breast-feed for several months without having enough food she will do so at the cost of her own body.

'High risk' of malnutrition in pregnancy is found among:

· Widows or women who have been deserted by their husbands;

· Women who have given birth to many babies, especially over a short period of time or if the last delivery was less than a year ago;

· Women who are suffering from diseases such as tuberculosis and moderate-to-severe anaemia; and

The appearance of a pregnant woman can suggest whether or not she is malnourished. Observe if she is generally thin or wasted. See if there are loose folds of skin over her upper arms, chest, or abdomen, or if her arms and legs are very thin. These signs will tell you whether or not she has stores of fat under her skin. If a woman shows these signs she is probably malnourished.

Anaemia, or "weak blood", is a common nutritional problem in pregnancy. In countries or regions with a high incidence of hookworm infestation or malaria, anaemia is a very common problem. Women need healthy blood to nourish their babies during pregnancy.

How to tell whether a woman is anaemic

An anaemic woman will not have enough red colour in her blood. The blood will be pale, and if you look at inner side of the lips or the lower eyelids, they will be pale, light pink or white. These should normally look red. If a woman is very anaemic she will easily become breathless after little exertion. Her face and feet may become swollen. Any woman in this severe condition should be referred to the supervisor or the nearest health centre. Visual aids are available in many countries to help community health workers to recognize anaemia.

Anaemia in pregnancy can be treated by a good mixed diet made up of the foods described below. The main nutrient that is required in the prevention of anaemia is iron. In many countries iron tablets are supplied to all pregnant mothers. One iron tablet should be taken every day with food. In pregnancy this should be taken from at least the third or fourth month onwards. Women should be warned that if they take iron tablets regularly their stools will be black in colour. In the health services of some countries, the community health workers are given the task of stocking and supplying these iron tablets. This is good because they get early information about who is pregnant. They can visit the women, give them the tablets, and encourage them to take the tablets and eat a better diet. Iron tablets should be kept out of reach of children. If swallowed in large quantities, they can be dangerous.

A good diet for pregnancy and lactation

During pregnancy and lactation a woman needs more food and a greater variety of food. More food is the first and most important thing. Diets based on cereals are generally good, but the woman needs more of them. She should eat one-fourth more food than she was eating before she became pregnant (25% extra). Find out how much she was eating before. Divide that into 4 portions. Tell her, or better show her, how much one of these portions is. This is the extra food she should eat, not only in pregnancy, but right through lactation.

A variety of foods will supply most of the nutrients a pregnant woman needs. These are listed below:

The cereal grains which are suitable for her diet include wheat, maize, sorghum, rice, and millet. It is better not to use refined or polished cereals because the nutritious part of the cereals is lost during such processing. Brown rice is more nutritious than polished white rice. Similarly, brown wheat flour (whole flour) is better than white refined flour. In some countries and in some cultures, cassava, yams, plantains, and potatoes are used in place of cereals.

Legumes or pulses are valuable, particularly for those who cannot afford animal foods or who do not eat them. The legumes include peas, beans, lentils, etc.

Vegetables, especially dark green leafy and coloured ones, such as tomatoes and carrots, supply special nutrients. Other vegetables and fruits are also useful.

Edible oils, butter, and sugar or molasses and their derivatives make food more tasty. They also supply energy in a concentrated form.

Animal foods are valuable but not essential. Do not emphasize meat, eggs, fish, etc. in group teaching, if such foods are beyond the means of the community.

4. Group discussion: Findings of the survey and what can be done.

Exercise 1. Finding out and classifying beliefs

The trainees should form pairs or small groups and visit a number of elderly women in the community. They should ask them about their traditional beliefs regarding food and diet during pregnancy and lactation. The trainees should then discuss with one another what they have learnt. All the beliefs should be classified into the 4 groups given below (it will probably be found that many beliefs fall into the last two categories):

Exercise 2. Planning and setting up demonstrations to teach pregnant women and lactating mothers about nutrition

Plan and set up a demonstration for pregnant women and lactating mothers by following the instructions given below:

· Show two bottles containing 700 ml of milk. This is the amount of milk a healthy woman can produce daily 3 months after delivery.

· Show an average daily diet of the community. Next to it show how this diet can be made suitable for a pregnant woman and a lactating mother. In particular it should contain more food (25% more) and a better variety of food, especially green leafy vegetables. Explain the reasons for selecting certain types of food during pregnancy and lactation.

· Demonstrate ways of increasing the nutritive value of foods commonly taken in the area; e.g., by allowing beans to sprout, by fermenting cereals and by using the water in which rice or vegetables have been cooked.

Exercise 3. Role-play concerning the beliefs about foods in pregnancy

Pregnant woman accompanied by her mother-in-law

The community health worker advises the pregnant woman to eat more food and a mixed diet. The woman complains that her baby will grow too big. Mother-in-law says some foods are bad in pregnancy. The community health worker assures the woman that there is no such danger. She also tells the mother-in-law gently and tactfully that some of her beliefs are not good for nutrition.

Note. Before doing this exercise the community health worker should have tried to understand the reasons for the beliefs held by older women in the community.

Ask trainees to examine the inner sides of lower eyelids and the lips of several pregnant women for anaemia. Discuss the findings with them, with special reference to what advice should be given to mothers for preventing anaemia.

Ask each trainee to think of one woman in the community who might be at risk of malnutrition. Ask her to give reasons why that woman is at risk and what should be done.

Anaemic pregnant woman who has not been taking her iron tablets

Neighbour who had a normal delivery and child without taking iron tablets.

The community health worker inquires why the anaemic woman has not been taking her iron tablets. The anaemic woman complains that she took a few tablets but she had abdominal pain and black stools. The neighbour says the woman was all right without taking any tablets. The community health worker explains and encourages the woman to continue taking the tablets.

Review local proverbs to see if any of them are related to feeding in pregnancy and lactation. Discuss how these can be used in nutrition teaching.