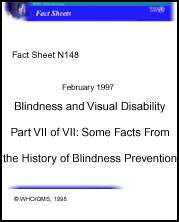 Part VII of VII: Some Facts From the History of Blindness Prevention

· The earliest medical records known to us, derived from the ancient river cultures of Mesopotamia, show that even 5,000 years ago medical care for the eyes was a speciality in its own right. The Hammurabian Code, discovered in 1902 by archaeologists working at Susa, itemized Sumerian Laws from about 3000 B.C. which included an indication that eye surgery must have been as perilous for the surgeon as for the patient. A surgeon was forbidden to charge more than 10 sheckels of silver for a successful eye operation; but if the operation failed, the surgeon would have his hands chopped off.

· A papyrus discovered at Thebes, the ancient capital of Egypt, names 20 eye diseases, and the Greek historian Herodotus, who visited Egypt in the fifth century B.C., met doctors there who specialized in ophthalmology because of the high incidence of blinding diseases.

· It seems likely that in very primitive societies children born blind were put to death. This can be deduced from the numerous injunctions in early religious writings to be humane to the blind. But the notion that blindness was a divinely inspired punishment persisted, while only in rare cases such as the poet Homer was the gift of genius proffered as a compensation.

· In general, the most that sightless people could hope for was to be a successful beggar. There are even undeniable indications that impoverished parents sometimes blinded their own children deliberately to give them extra appeal as waifs.

· A new era for the blind, the era of the asylum, was slow to arrive. One of the earliest special hospices established specifically for the care of the sightless is said to have been founded in the fourth century A.D. at Caesarea in Cappadocia. Saint Bertrand, a seventh century Bishop of Le Mans in France, founded an institution near Pontlieu, and William the Conqueror, the Norman king who invaded England in 1066, is credited with founding several hospices in expiation for his worldly sins.

· Two centuries later, the captors of a large number of defeated crusaders backed up their demand for a huge ransom by blinding 20 prisoners for every day that the ransom went unpaid. It took 15 days. According to tradition, this tragedy inspired King Louis IX of France in 1260 to take under his royal protection an institute for the care of the blind in Paris, the Hospice des Quinze-Vingts (Fifteen-Twenties) which still exists to this day.

· Among the earliest schools for the blind were those of Liverpool (1791), London (1799), Vienna (1805) and Berlin (1806). Institutions such as these meant that the blind themselves began to join forces to do something about their own situation, not only by improving the lot of those who had lost their sight but also by trying to prevent the sighted from losing their sight.

· In 1950, at the third World Health Assembly of the World Health Organization (WHO)a resolution was adopted on “Trachoma and possibility of successfully eradicating it by the application of modern methods of control”. Subsequently, three WHO Expert Committees were convened and a number of field projects were implemented in the trachoma endemic countries in the 1950s. Although successful in the short term, many of these projects were in the nature of a campaign rather than a programme and failed to achieve lasting results.

· In the 1960s, it was gradually realized that apart from trachoma, there were other important causes of avoidable blindness such as cataract and glaucoma. In 1972, a WHO Study Group on the Prevention of Blindness was convened, which laid the foundation for today’s internationally accepted definitions of blindness and visual impairment.

· In January 1975, the International Agency for the Prevention of Blindness came into being as an independent, nongovernmental organization to lead a world movement “for the prevention and cure of blindness and to preserve sight”.

· A resolution approved at the Twenty-eighth World Health Assembly in Geneva in May 1975 encouraged Member States “to develop national programmes for the prevention of blindness especially aimed at the control of trachoma, xerophthalmia, onchocerciasis and other causes and to introduce adequate measures for the early detection and treatment of other potentially blinding conditions such as cataract and glaucoma”.

· In 1978, the WHO Programme for the Prevention of Blindness (PBL) was created. Ever since, PBL has developed science-based strategies to fight major causes of avoidable blindness and visual disability worldwide and provided assistance to over one hundred WHO Member States in setting up national programmes for the prevention of avoidable blindness. Through its technical and managerial leadership PBL plays a key catalytic role in enhancing the partnership of nongovernmental organizations with WHO Member States.