Given that 30 to 60 per cent of the population of cities in developing countries lives in irregular settlements,1 it is now widely accepted that regularization policies are - at least in the short-term - the only realistic solution to improving the housing conditions of the urban poor. For this reason, an increasing number of governments at central and municipal levels have now embarked on tenure upgrading and regularization projects and programmes. However, in many cases, points of resistance and obstacles still hinder the large scale implementation of such policies. For this reason, the benefits of tenure regularization need to be more clearly assessed and stated.

What are the advantages of regularizing informal settlements?

Regularizing informal settlements means, first of all, providing security of tenure to the populations concerned. This is an essential step. Households should not be evicted by an administrative or a court decision for the sole reason that they are not the owners of the land or house they occupy, or that they have not entered into a formal agreement with the owner, or do not comply with planning and building laws and regulations.

When in situ regularization proves impossible (for planning, public health, or environmental reasons), then security of tenure means that households concerned must be given fair compensation or relocated to another place with comparable advantages. This does not mean that households will necessarily be granted real rights.

Secondly, regularizing informal settlements means that the households concerned must have access to basic urban services. For these households, tenure regularization has obvious advantages:

· as emphasized by John Turner2 nearly three decades ago, it encourages households to improve their housing conditions;

· it encourages and facilitates investment in home based activities which play a major role in poverty alleviation;

· it helps to mobilize communities to contribute to the management and maintenance of their settlement environment.3

For public authorities, the regularization of informal settlements and the provision of secure tenure can - in principle - have an effect on local resources as it improves the rate of tax recovery or makes possible the setting up of local taxation, both on property and on economic activities. In addition, by making possible the identification of service beneficiaries, it improves the recovery of services and equipment costs. For many observers, tenure regularization policies tend to accelerate the integration of informal land and housing markets and economic activities in general into the sphere of the formal economy, especially when tenure regularization is accompanied by the allocation of real rights, whether freehold or leasehold.4 In political terms, regularization programmes are seen as a significant step to ensuring social peace and stability in cities.

What problems must be addressed?

In order to evaluate the real benefits of regularization policies, three main problems must be addressed: legal, administrative and financial.

Legal problems concern the land rights issue.5 Despite repeated statements from many governments, providing security of tenure does not necessarily require access to land ownership, especially through individual property rights. In most cases, this is not a realistic objective. Giving real rights is a complicated, time-consuming and expensive process. Administrations in charge of land management can simply not cope with the demand. However, it is essential that the right to occupy land for housing (whether it is guaranteed by a permanent or temporary administrative permit or by any form of non-transferable leasehold) can be converted into a real right if the household needs it (for selling, inheritance reasons, investment project or to mortgage the property). In this case, it can be agreed that formal land registration and the delivery of a real right should be made case by case at the expense of the applicant.

An appropriate administrative and regulatory environment must be set up, adapted to:

i. the identification of rights holders and households entitled to tenure regularization:
ii. the resolution of land related conflicts; and
iii. the allocation procedure of rights on land.

Financial problems result from the fact that, to be successful, tenure regularization policies must be implemented on a large scale. If limited to a few settlements, regularization programmes will not have any sustainable effect at city level. This requires mobilization of huge financial and human resources. In addition, successful tenure regularization policies must be accompanied by the provision of basic services in all regularized settlements. This requires sufficient resources, both public and private. Innovative forms of partnership can help to resolve this problem.6

Who benefits and who loses? 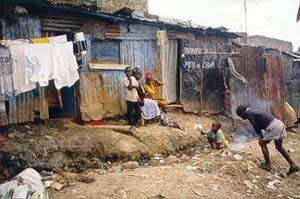 Regularization would improve access to basic services for slumdwellers who currently rely on informal means to secure these services. - © UNCHS/Rasna Warah

· the direct beneficiaries living in informal settlements who would no longer be subjected to the discretionary power of landowners and government administrations i.e. who would not be evicted;

· governments and political leaders, as tenure regularization has an effect on social control;

· governments at central and local levels, which can expect improvement in their financial base and resources through, for example, taxation; (Investment in housing and infrastructure by the beneficiaries themselves also eases the burden on governments.);

· investors who would benefit from the formalization of informal processes;

· providers of urban services which would be able to identify service users and charge rates.

However, lessons from experience indicate that four broad categories of urban stakeholders can be directly and adversely affected by tenure regularization policies, for different sets of reasons:

· Tenure regularization can be detrimental to some households living in irregular settlements, especially those who have the most vulnerable legal or social status (renters or sub-renters on squatter land, newly-established occupants who are not considered eligible for regularization, single young men and women, women heads of households, etc.)

· Tenure regularization programmes can be detrimental to urban and suburban landowners as they cannot be compensated on a market price basis: the populations concerned do not have sufficient resources, and public authorities can rarely subsidise large-scale land acquisition programmes. Negotiation can help find an acceptable solution for the landowner (for example through land readjustment or land sharing), but this requires sound political will, efficient negotiation procedures and an appropriate regulatory framework.

However, the situation varies according to the type of local situation. In the case of squatter land, especially in a global context where evictions can no longer be envisaged due to political risks, tenure regularization can be seen by land owners as the only opportunity to obtain some form of compensation from public authorities or beneficiary households.

In all regularization projects and programmes, the actors who have least to gain are land owners, intermediaries and/or informal developers - those who are involved in the informal rental sector, such as shack owners in suburban areas or inner city slums. Regularization puts an end to their highly profitable but exploitative activities. They are also not legally entitled to any form of compensation. It is essential to deal with these actors. But this is often difficult as they usually have close connections with officials and decision-makers at local levels.

For government officials, the problem is more complicated as it is linked to cultural behaviour and the dominant administrative culture. What is at stake in many cities is the discretionary power of government officials to allocate land and to regularize tenure7. Countries in sub-Saharan Africa - where the allocation of land remains mostly a State monopoly and where several land markets co-exist - illicit practices and corruption are undermining all administrations in charge of land management. Major problems encountered in regularization policies emanate from the passive resistance of intermediate level officials in central and local governments as they are in a position to obstruct or slow down implementation and enforcement measures.

How can resistance and obstacles be overcome?

Lessons from experience suggest that emphasis should be placed on the following set of measures.

· At capacity building level, particular attention must be placed on information and training of government officials in charge of land management, especially at the local level. Training must focus both on technical matters (new land management techniques, land information systems, etc.), on the social dimension of land management (social and economic function of urban land) and on the land markets mechanisms.

· At research level, particular attention should be given to alternatives to property rights for securing tenure, including research on innovative land surveying techniques and land registration procedures. Another research area concerns the understanding of land management practices within government administrations concerned. As far as possible, research must be combined with capacity-building.

· At land management and planning level, experience stresses that successful regularization policies require that more decision-making power is transferred to local entities, including community-based organizations. In addition, appropriate procedures for the large scale implementation of regularization policies must be set up, especially progressive procedures for allocating rights on land. This must be generally accompanied by a drastic revision of norms and standards.

· At political and administrative levels, one of the key issues is the decision making process. Particular attention must be given to improving transparency at all administrative levels. This requires the consolidation of local governance and decentralization of administrations in charge of land management. In this context, compensatory measures must be found to encourage government officials to support regularization policies.

Alain Durand-Lasserve is Research Director at the Centre National de la Recherche Scientifique in Paris, France. He is also Scientific Coordinator of the European Science Foundation Network on “Innovative practices and emerging concepts for sustainable urban management in developing countries: a European contribution”.

3 These issues are discussed in:

7 These issues have been discussed recently in the International Workshop on: “Tenure security policies in South African, Brazilian, Indian and sub-Saharan African cities: a comparative analysis”, IFAS and Development Works, Johannesburg, 27-28 July 1989.

A world of difference. - © UNCHS/P.Wambu