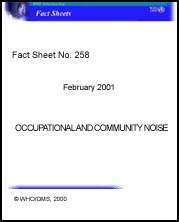 The recognition of the noise as a serious health hazard as opposed to a nuisance is a recent development and the health effects of the hazardous noise exposure are now considered to be an increasingly important public health problem.

· More than half citizens of Europe live in noisy surroundings; a third experience levels of noise at night that disturb sleep. (ref. Guidelines p.XII)

· In the USA in 1990 about 30 million people were daily exposed to a daily occupational noise level above 85 dB, compared with more than nine million people in 1981; these people mostly in the production and manufacturing industries. (ref Noise Sources p.85)

· In Germany and other developed countries as many as 4 to 5 million, that is 12-15% of all employed people, are exposed to noise levels of 85 dB or more. In Germany, an acquired noise-related hearing impairment that results in 20% or more reduction in earning ability is compensatable; in 1993, nearly 12 500 new such cases were registered. (ref Noise Sources p.85 and p. 86)

· Prolonged or excessive exposure to noise, whether in the community or at work, can cause permanent medical conditions, such as hypertension and ischaemic heart disease. (ref. Guidelines p.XII)

· A link between community noise and mental health problems is suggested by the demand for tranquillizers and sleeping pills, the incidence of psychiatric symptoms and the number of admissions to mental hospitals. (ref. Guidelines p.XII)

Noise can cause hearing impairment, interfere with communication, disturb sleep, cause cardiovascular and psycho-physiological effects, reduce performance, and provoke annoyance responses and changes in social behaviour. The main social consequence of hearing impairment is the inability to understand speech in normal conditions, which is considered a severe social handicap.

Sound and the ear

The response of the human ear to sound depends both on the sound frequency (measured in Hertz, Hz) and the sound pressure, measured in decibels (dB). A normal ear in a healthy young person can detect sounds with frequencies from 20 Hz to 20 000 Hz. (Ref. Guidelines p. IX). Speech frequency ranges from 100 to 6000 Hz. (ref Guidelines p.XI).

For most people, life-time’s continuous exposure to an environmental average noise level of 70 dB will not cause hearing impairment. An adult person’s ear can tolerate an occasional noise level of up to 140 dB, but for the children such an exposure should never exceed 120 dB. (ref. Guidelines p.XI).

Continued growth in transport systems - highways, airports and railways - generate more noise. Many countries have regulations on community noise from rail, road, construction and industrial plants based on emission standards, but few have any regulations on neighbourhood community noise, probably owing to difficulties with its definition, measurement and control. This and the insufficient knowledge of the effects of noise on people handicap attempts to prevent and control the problem.

· Protection against hazardous noise exposure should be included into overall hazard prevention and control programmes in workplaces.(p218) The dangers of noise should be recognized before workers start complaining of hearing difficulties.

Machine safety: A European Union Directive requires that the machines are so designed and constructed that hazards from the noise emissions are minimized. Declarations of the noise emissions of machines are required, to allow potential buyers not only to select the least hazardous equipment but also to calculate the noise impact at workplaces and to help with noise-control planning. (ref Noise Sources p.100 - 101)

· It is 10 times less expensive (unit cost per decibel reduction) to make noise-generating processes quieter than to make a barrier to screen the noise.(ref Engineering Noise Control p. 231)

Noise levels can be lowered by the use of noise-control enclosures, absorbers, silencers and baffles and by the use of personal protective equipment, such as earmuffs. Where technical methods are insufficient, noise exposure may be reduced by use of hearing protection and by administrative controls - such as limiting the time spent in noisy environment and scheduling noisy operations outside normal shifts or at distant locations.

Essential elements of noise control programmes are education and training of the workers as well as regular hearing tests. (ref. Hazard Prevention and Control Programmes p.221)

WHO has responded in two main ways: by developing and promoting the concept of noise management, and by drawing up community noise guidelines. The field is marked by a scarcity of literature, especially for developing countries. Some 20 years after its last publication on noise, WHO has issued Guidelines for Community Noise. This publication, the outcome of a WHO expert task force meeting in London in March 1999, includes guideline values for community noise (listing also critical health effects ranging from annoyance to hearing impairment), for example: (ref Guidelines p. XVIII)

*The ear has different sensitivities to different frequencies, being least sensitive to extremely high and extremely low frequencies. (ref Fundamentals of Acoustics p. 19) Because of this varied sensitivity, the term "A weighting" is used: all the different frequencies, that make up the sound, are assessed to give a sound pressure level. The sound pressure level measured in dB is referred to as "A-weighted" and expressed as dB(A). (ref Guidelines p.IX and X).

The guidelines also offer recommendations to governments for implementation, such as extending (and enforcing) existing legislation and including community noise in environmental impact assessments. The role of WHO is to provide leadership and technical support.

The Internet address for the Guidelines for Community Noise is www.who.int/peh/.

For further information, journalists can contact Office of the Spokesperson, WHO, Geneva. Telephone (+41 22) 791 25 99. Fax (+41 22) 791 4858. Email: inf@who.int All WHO Press Releases, Fact Sheets and Features as well as other information on this subject can be obtained on Internet on the WHO home page http://www.who.int/