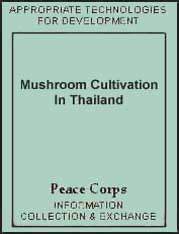 With all materials gathered, the planting of wood ear mushroom spawn can proceed. The first step is to punch or drill holes in the logs where spawn will be planted. The holes should be 1.3-2.5 cm deep (the hole should be punched or drilled through the bark and into the hardwood section of the log, see Figure 33) and 12-15 cm apart. Make the holes in lines or a zigzag pattern all around the log. It is not necessary to make holes in the ends of the logs.

Once the holes have been made, fill each hole to the top with spawn. Do not press the spawn into the hole too tightly. Simply place the spawn in the hole and pack gently, making sure that the hole is completely full.

After placing spawn in the holes, seal the holes with bark, hardwood, plastic or wax plugs. If a hammer-punch is used, it will be possible to use bark or hardwood plugs as the hammer is sold with a removable head attachment designed to make cover plugs. Use a "trash log" to make the plugs, punching plugs out of the logs until it is impossible to punch anymore. Notice that the attachment makes plugs larger in diameter than the hole punched for spawn planting. This is to ensure a snug fit and to compensate for plug shrinkage as the wooden plug dries out. Hardwood plugs are usually better to use than bark plugs since the former tend to shrink less and are more likely to stay over the hole for a longer period of time.

To secure the plug in place, position the plug over the hole and strike the plug with a hammer or other hard object, driving it into the spawn-filled hole until the plug top is even with the surrounding bark. If a drill is used, and bark or hardwood plugs cannot be made, plastic plugs (available at most spawn outlets) or wax can be used to seal the hole. Plastic plugs are used in the same manner as bark or hardwood plugs and work well, but must be purchased, increasing total input costs. Wax also works well as a plug and can be purchased cheaply at most village temples. To use wax as a plug, first melt the wax, then allow it to cool before applying to the log. Hot wax should not be applied to the log as it will kill the mushroom spawn. While the wax is still soft, seal the holes, filling each with wax to the level of the surrounding bark.

Figure 35: Placement of Holes in Logs for Spawn Planting2

After the spawn has been placed in the holes and the holes sealed, the logs are ready to be incubated for approximately three weeks. It is important to incubate the logs in a place where the logs won't come in contact with direct sunlight, wind, or moisture. If exposed to sunlight or wind, the logs will dry too quickly, causing the spawn to die before spreading throughout the interior of the log. If exposed to moisture, the spawn will exert its energy to produce mushrooms rather than spreading to the interior of the log to produce more spawn. As a result, overall mushroom production would be very small and short-lived. Consequently, do not water the logs until the Incubation period is over.

The desired sequence of events is for the logs to dry slowly, with the spawn following the remaining moisture to the core of the log. The log will then be filled with dormant mushroom spawn by the end of the Incubation period. As mentioned before, the incubation period for 20 cm diameter log is approximately three weeks. Smaller diameter logs require a slightly shorter Incubation period, larger logs slightly longer.

Placement and Watering of Logs

After incubation, the logs are ready to be moved to the site of cultivation. The most common way to store logs for cultivation, and the method that makes mushroom harvest the simplest, is to lean the logs against a bamboo or wooden pole which is secured parallel to and approximately 70 cm above ground level (the pole can be as long as desired) as shown in Figure 37. The logs should lean against both sides of the pole in order to reduce stress. Once in place, the logs are watered several times daily. (Note: Many growers of wood ear mushrooms advise soaking the logs in water overnight prior to moving them to the site of cultivation in order to help encourage rapid initial mushroom growth. This will not, however, increase the total mushroom production of the logs.) It is impossible to water the logs too much. Wet, rotting logs provide the best atmosphere for wood ear mushroom growth! Logs that are moist at all times will yield large quantities of mushrooms.