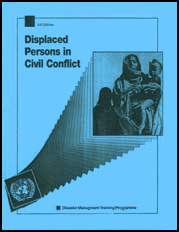 Assisting displaced persons is one of the most politically sensitive activities carried out by the UN staff. In cases where the government is one of the parties in a civil conflict, UN staff is often placed in the difficult position of having to deal with government agencies who are reluctant to provide assistance to people whom they consider "enemies." In many cases, government actions or policies may be root causes of the conflict

The fact that the UN may provide assistance through the host government often leads to charges that the UN is not a neutral agency. Many liberation groups mistrust the UN and most donors and NGOs find the UN's position frustrating. Unfortunately, this is a working reality. When the UN is involved, humanitarian assistance can only be provided within certain limits. However, those limits can be quite broad and the UN has a major role to play in humanitarian operations which cannot be discounted. In any assistance program for the displaced, all UN staff must clearly understand what these limits are and how to operate effectively within the constraints.

Assistance is often provided to internally displaced persons from the government side. This is because most of the displaced migrate to government-controlled areas, due to migration routes, family ties, language differences and economic survival. Displacement is often as much an economic survival strategy as a flight from conflict. The displaced must earn a living. They cannot rely on international relief, so they must go where the economy is functioning. They may migrate to the government side because they are familiar with, and have a right to participate in, the national economy. They are not necessarily, as is often claimed, making a political statement or choosing one side over the other. There are obvious political obstacles for any international organization to aid displaced persons in opposition-controlled areas.