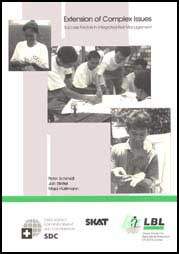 This study has been mandated by SDC to the Swiss Centre for Agricultural Extension (LBL) and specifically to a study team of two agronomists and one ethnologist. SDC asked the study team to analyse five projects involved with the introduction of IPM and to derive from this analysis the factors that had contributed to success. The focus of the study is extension, and the emphasis is to learn from successes rather than to analyse weaknesses or failures in given projects.

The following projects and programmes were chosen as examples:

Except the Farmer Field Schools in Indonesia, which were visited in the frame of a review mission in 1996 (cp. Eveleens 1996), the analysis of the other projects was based on documents and personal discussions with project representatives. The steps of the study were as follows:

1. Elaboration of a study concept.

2. Selection of the projects to be analysed (by SDC).

3. Preparation of a project description.

4. Several feed-back rounds with project representatives until a consensus regarding the project description was reached.

6. Discussion of theses with project representatives, various IPM and extension experts, personally or by correspondence.

7. Drafting of final report and including last feed-backs from projects.

It is intended to use the results of this study as an input in various workshops focusing on the issue of "Extension in complex situations".