A city level Workshop was first organised in Rajkot in October 1998. The objective of the Workshop was to provide relevant information and guidance to the representatives of the neighbourhood committees, non-governmental organisations, elected representatives of the urban local bodies and officials engaged in providing basic services concerning health and livelihood of the urban poor. The idea was to clarify the concept of an integrated approach based on synergy and convergence and to introduce related strategies for community development to the participants of the seminar.

The Workshop was attended by a representative of UNCHS, the nodal officer for Rajkot from Ministry of Urban Development, the Municipal Commissioner, elected representatives including the Mayor, Deputy Mayor, Chairmen of the standing committees, members of neighbourhood committees, representatives of NGOs, academicians, medical and paramedical professionals etc.

The strategies adopted as per the recommendations of this Workshop were as follows:

· Slum development programmes should be based on active public participation.

· People should be encouraged to articulate their needs and determine their priorities.

· Neighbourhood committees should be formed for all slum areas.

· House-to-house survey of the slum areas should be extended to cover the slum pockets in the areas recently merged with the Rajkot Municipal Corporation which were earlier managed by three different municipalities.

· Specific work based on the felt needs should be directly recommended by the Neighbourhood Committees and should not be imposed by officials of the Corporation.

· In the majority of the notified slums basic services have already been satisfactorily provided by the Corporation. Hence slum pockets mostly deficient in these services should be taken up on a priority basis.

· The Workshop identified the need to conduct the training programmes in areas which include Solid waste management - hygienic and healthy practices; Peoples participation in cleanness; Better personal and public health practices; Universalisation of primary education; First-aid techniques; and Empowerment of women.

The following activities were undertaken for slum development in Rajkot under the UNCHS project:

(i) House-to-house survey of all slum areas of the city was carried out by the Gujarat Slum Clearance Board. This survey provided specific information on the following subjects.

· Various types of information on families residing in different slums.

· Information regarding status/condition of each slum.

(iii) Neighbourhood committees were formed and activated to come up with specific recommendations for work related to basic services to be taken up in their areas.

(iv) Estimates were prepared for specific work in various slum areas which were to be executed subsequently.

(v) A seminar was organised in October 1998 to review the work done till that point of time and to provide full information to the representatives of the NGOs and members of the Neighbourhood Committees where development works were to be taken on a priority basis.

(vi) The Gujarat Slum Clearance Board was directed to commence its survey in the newly acquired area of determining the level of basic services in the slum pockets and to identify the requirements for community services. 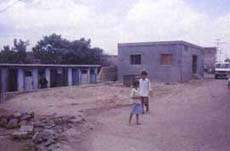 This new public latrine replaces the old dilapidated one in the background. Slum dwellers are willing to pay for the upkeep of this vital facility.

The details of work implemented in the 10 slums initially taken up under the UNCHS programme are summarised in Table 3.4. Further, the on-going activities till the end of the programme period have also been delineated. These have been categorised broadly under three heads - Education and Awareness Creation, Vocational Training and Physical Slum Improvement. These proposed activities are tabulated in Table 3.5. 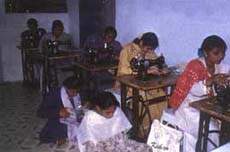 Young women train at this slum vocational training facility. Tailoring and beauty treatment are seen by slum women to have good potential for sustained livelihood.

Keeping in view the concept of converge of activities under various programmes coupled with the necessity to ensure the extension of facilities and improvement of other slum areas in a sustainable manner, a city level investment plan has been prepared for Rajkot. It gives a broad outline of future activities and anticipated costs. The Plan is presented in Table 3.6.