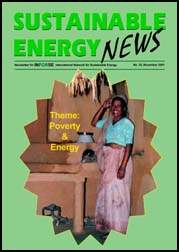 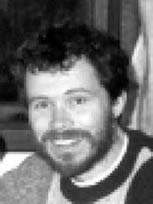 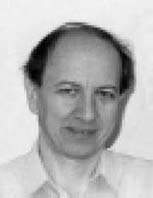 The reelected Coordinators: Gunnar B. Olesen, (up) OVE Denmark and Emil Bedi, (down) FAE Slovakia.

The Action Plan included, among other activities:

· continuation of the DIERET internet education, including a CD with illustrated texts;

· co-operation with other INFORSE regions on actions related to Vision 2050 and Rio+10;

· a continued commitment to monitor and contribute to energy policy in the EU;

· follow-up on the European wind campaign with national proposals;

· continuation of the work for Pan-European energy-efficiency initiatives.

The photos are from the Pan-European Seminar and Tour in Denmark, and the INFORSE-Europe Meeting. 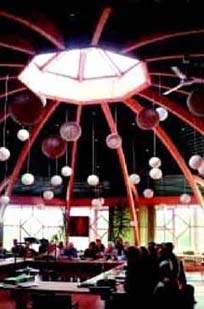 - Meeting at the Folkecenter for Renewable Energy, 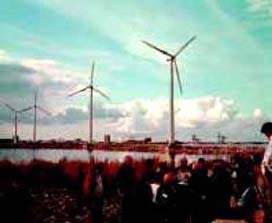 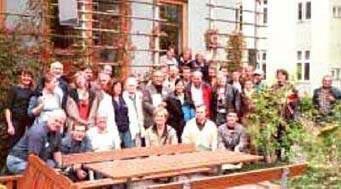 - Group photo in front of the office of OVE in hus.

In September, 2001, more than 50 people met at the Pan-European Sustainable Energy Tour & Seminar in Denmark.

Most of the presentations from the Seminar are now freely available on-line at the INFORSE-Europe website. It includes, among others, articles on:

· National strategies for management of fluctuations of windpower and combined heat and power (CHP);

· Sustainable Energy Future - A Nordic Perspective (article on limiting energy consumption via technology and by a decent way of life);

· Evaluation of the impact of green taxes in the Nordic countries;

The Seminar was supported by the Danish Outdoor Council, Planenergi (Denmark), and others.

Just before the 7th Climate Convention Conference (COP7, Oct. 29-Nov. 9, 2001), the EU Commission proposed a strategy to reduce the emissions of the EU countries to reach the Kyoto targets.

Central in the strategy is a proposal for an EU directive that will make the burden-sharing of reductions among EU countries legally binding.

According to this burden-sharing, the targets of the 15 EU countries are different, varying from 21% reductions in Germany and Denmark, to increases in Spain, Sweden, and other countries.

Another cornerstone in the strategy is a proposed directive to establish an EU framework for emissions trading and an EU-wide market for emissions. EU emissions trading is expected to cover 4,000 -5,000 installations that are responsible for 46% of CO2 emissions in the EU countries. In addition to this directive, another has been announced to link Joint Implementation (JI) and the Clean Development Mechanism (CDM) to the proposed EU emission-trading scheme. It will specify under which conditions "credits" from the international JI and CDM projects can be added to the allowances of the EU scheme and can be traded accordingly.

A series of other measures have also been announced as part of the strategy, including:

· Proposal for a framework directive for minimum efficiency requirements for end-use equipment, such as domestic appliances, motors, lighting and heating, as well as air-conditioning equipment;

· Proposal for a directive for promotion of combined heat and power (CHP);

· Shift the balance of transport modes from roads to rail and waterways with a package of measures based on the recent "White Paper on a Common Transport Policy";

· Proposals for improvements in transport infrastructure use and rate structures, to integrate environmental costs and reduce congestion. A framework directive and a directive for harmonising fuel taxes have been announced;

· Proposal for a biofuel directive, probably with national targets for biofuel use and with provisions to allow EU countries to reduce petrol- and diesel taxes on biofuels and on mixtures of mineral oil and biofuels;

The Commission acknowledges that these measures might not be enough to reach the target of 8% reduction of greenhouse gases, and expects to continue the process of developing new measures. It even provides a list of 7 possible new measures, starting with an initiative on the promotion of heat production from renewable energy.

NGOs have urged the Commission to present its strategy to COP7, but the list of proposals is not without problems, and some useful proposals are missing.

The strong emphasis on emissions trading make the entire strategy vulnerable to problems with this new and untested measure. Emissions trading is also a measure about which NGOs hold a range of opinions.

The proposal to couple the EU’s emissions trading with JI and CDM projects will make the strategy less efficient in reducing greenhouse-gas emissions in EU countries. Further, the biofuels directive have been criticised by the European Environmental Bureau (EEB) because it could increase agricultural pollution. The Danish Folkecenter for Renewable Energy has proposed that fuel-tax reductions should prioritise pure vegetable oils over processed biofuels and mixtures with mineral oil.

Missing from the strategy are the ideas of a European Sustainable Energy Agency, efficiency standards for power plants, and measures for renewable energy for heating, though the latter is included in the "waiting list". Tthese energy measures have been proposed by NGOs in the preparations of the European Climate Change Program (see Sustainable Energy News no. 33 and 34).

More information: Read the EU Commissions "Communication on the implementation of the first phase of the European Climate Change Programme" (COM 2001-580) at http://europa.eu.int/eur-lex/en/com/index1.html.

By Dag A. Hd, the Norwegian Society for the Conservation of Nature

The first demonstration plant has opened in Murmansk this fall. The plant is a 200-kW second-hand Danish turbine.

This is the result of an initiative of the environmental organisation GAIA in Murmansk, the Norwegian Society for the Conservation of Nature, and others.

The organisations behind the windturbine in Murmansk have conducted several studies in order to find future alternative sources of power to replace that produced by the Kola Nuclear Power Plant. The latter plant has to be closed at the end of its lifetime; the two oldest reactors are already slated for shutdown in 2004.

One of the studies describes Kola as the most suitable region in Europe for large-scale wind power development. Wind power has proved to be one of the most promising alternatives, and the suitable conditions make windpower one of the most cost-efficient options for new power production in the Murmansk region.

While power prices generally are low in Russia, rising fuel prices and expensive transportation make windpower commercially interesting to the many villages and settlements not connected to the grid in Northern Russia. A feasibility study shows a short payback period on the investment in combined wind-diesel systems in these locations. VetroEnergo has therefore started to develop business plans for the installation of wind-diesel systems in some remote settlements on Kola, in Archangels, and in Nenets. 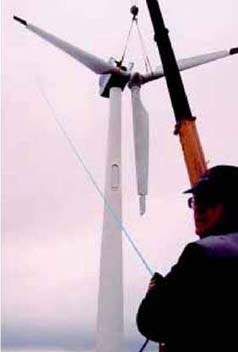 The wind mill at Barents Sea coast in NW Russia has excellent conditions for wind power. The wind resources are good and the infrastructure is suitable for large-scale development. win7 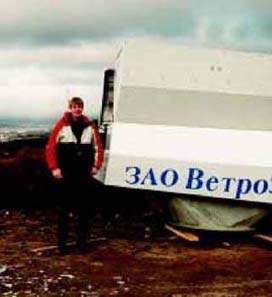 Dag A. Hd standing beside the 200 k-W second-hand plant just before it has been erected on a hill visible from the city of Murmansk. The electricity produced by the turbine will be partly consumed by the hotel, and partly sold to the local grid.

Starting in February this year, 8 NGOs from Catalan have formed a platform called ‘Catalonian Agreement for Clean and Renewable Energy’.

The goal is to build a strong coalition of groups and to collect individual signatures of support, in order to put pressure on political decision-makers.

In the first part of the agreement, the groups express their worries about Catalan’s energy dependency on fossil and nuclear fuels; about the decreasing energy efficiency and increasing vulnerability of the present centralised energy system in Catalan; about the energy illiteracy of the population; and about environmental problems of energy production.

In the second part is a proposal to establish a plan and a timetable to phase out, before the year 2010, nuclear power in Catalan, to phase out gradually the thermal power plants based on the most polluting fossil fuels, to increase the energy efficiency of the Catalonian energy system, to ensure that wind energy projects to be developed in Catalan follow sustainability criteria, and to democratise energy decisions.

The third and final part of the document includes a list of commitments of the signatories to the agreement. They will work with all the society sectors (NGOs, political parties, private companies, governments) to open the door to a distributed energy system based on clean and renewable energies, work for the phaseout of nuclear energy, support projects for the increase of energy efficiency, support projects for renewable sources of energy if they are based on sustainability criteria, and work to become examples of sound energy practices in everyday life.

So far, the 8 groups have collected more than 1,000 signatures on the agreement. Among the groups is the INFORSE member organisation Group de Scientcs i Tics per un Futur No Nuclear (Scientists and Technicians Group for a Non Nuclear Future).