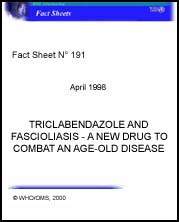 Fascioliasis, an infection due to liver flukes (see below), is normally a disease of domestic herbivorous animals such as sheep, cattle and goats, which are the normal hosts. Man is an accidental host but, depending on dietary habits, there can be very high prevalence in populations of particular areas. Infection results from eating uncooked, and usually unwashed, aquatic vegetables on which larval parasites are encysted. Fascioliasis is endemic in 61 countries and has become a foodborne infection of public health importance in parts of the world such as the Andean highlands of Bolivia, Ecuador and Peru, the Nile delta of Egypt, and northern Iran.

It is estimated that 2.4 million people are infected world-wide and more than 180 million are at risk of infection. In some communities in the highlands of Bolivia, more than 60% of the population is infected. An outbreak along the shores of the Caspian Sea in northern Iran between 1989 and 1991 affected more than 10,000 people, causing severe illness. Other outbreaks have occurred in Algeria, Cuba and France. The infection may be more widespread in humans than is appreciated, as it is present in domestic animals in almost all countries where cattle and sheep are reared. Another factor in the spread of the infection may be the increase in the consumption of uncooked aquatic vegetables.

Cause: The liver flukes Fasciola hepatica and Fasciola gigantica are flat worms which live in the bile ducts (in the liver) of their definitive hosts; they also live in the bile ducts of ruminants (animals that chew the cud) and man. Infection occurs when humans consume uncooked aquatic vegetables, such as watercress, which are contaminated with encysted parasite larvae. The larvae escape from the cysts in the small intestine soon after ingestion and migrate across the intestinal wall into the abdominal cavity. Within 24 hours of infection, the larvae have transformed into immature worms. Once they reach the liver, they move around the liver for up to six weeks, feeding on liver tissue, until they reach the bile ducts where the worms mature into adults. As these trematodes (flukes) are hermaphrodites (organisms which have both male and female reproductive organs), each worm produces eggs which are released into the biliary passages and end up in the faeces.

Life cycle: When the immature eggs reach fresh water, they take up to two weeks to mature, at which time they hatch, releasing miracidia (hatched larvae). The miracidia swim around until they encounter suitable snail intermediate hosts to infect, or they die within 24 hours. Suitable vectors are aquatic or amphibious snails of the Lymnaeidae family. After the miracidia infect snails, they undergo asexual multiplication, producing several thousand cercariae over several weeks. The cercariae are released into fresh water. The cercariae lose their tails upon encysting as metacercariae (infective larvae) on aquatic plants. Aquatic plants associated with the fascioliasis infection are watercress and water caltrop. Definitive hosts eating uncooked aquatic plants and vegetation with encysted metacercariae are infected, starting the cycle over again.

Signs and Symptoms: The appearance of symptoms as well as the severity of the disease will depend on the intensity of infection and the host. Symptoms may appear a few days after ingestion of larvae, when the immature worms reach the abdominal cavity and begin migrating across or in the liver. These symptoms may be related to lesions in the abdominal cavity and the liver during the acute phase of the infection. Typical symptoms during this phase may include fever, abdominal pain, other gastrointestinal disturbances and urticaria. There may also be hepatomegaly (enlarged liver), anaemia and jaundice.

There may be a latent phase when the worms reach the bile ducts, mature and begin to produce eggs. The only symptom would be prominent eosinophilia (high white blood cell count suggesting a parasitic infection). However, adult worms in the bile ducts are likely to cause inflammation and hyperplasia (increased growth) of the epithelium skin layer. The inflammation and large size of the worms may result in obstruction of the bile ducts. The signs and symptoms of this chronic phase may include biliary colic, epigastric pain, jaundice and abdominal tenderness. In long-standing chronic infection, the liver is usually enlarged with tenderness on palpation.

Diagnosis: The definitive diagnosis of Fasciola infection is by demonstration of the characteristic eggs in faeces. As is the case for other trematode eggs, Fasciola eggs have an operculum (a distinguishing feature) on one end and are oval in shape.

The usual parasitologic techniques for investigating stool specimens can be used to detect the eggs. The Kato-Katz technique for diagnosis is useful when quantification is required and in epidemiological surveys. Immunodiagnostic tests for both antibody and antigen detection have been developed. Other serology tests may demonstrate prominent eosinophilia, leukocytosis (increased white cell count) and anaemia suggestive of infection.

Treatment: Until recently, the treatment of fascioliasis has been less than optimal. The drug previously used, bithionol, had to be administered orally over five days at a dosage of 30 mg/kg body weight. Praziquantel, a very effective drug against most trematode infections, is inactive against Fasciola species.

Triclabendazole has been used in veterinary practice for fascioliasis since 1983. In animals, this drug was highly efficient against both mature and immature Fasciola worms at a dosage of 10 mg/kg body weight. It was not used in humans until the 1989 epidemic near the Caspian Sea when Iranian authorities approved the use of veterinary formulations to address the problem.

In 1990, the World Health Organization's (WHO) Division of Control of Tropical Diseases (CTD) and the pharmaceutical company Ciba-Geigy concluded a Memorandum of Understanding to conduct additional clinical trials of triclabendazole in the treatment of fascioliasis and paragonimiasis. Ciba-Geigy agreed to perform all the non-clinical studies required, while WHO assumed responsibility for developing a clinical trial protocol, encouraging, supporting and analyzing the data from these trials. The clinical studies were carried out on 245 patients with fascioliasis in 6 trials, and on 261 people with paragonimiasis in 3 trials. The trials on the use of triclabendazole in treating fascioliasis were carried out in Bolivia, Chile, Cuba, Iran and Peru. Studies on the treatment of paragonimiasis were conducted in Cameroon and Ecuador.

Different doses of triclabendazole were studied during these trials and it was concluded that the most efficient dosage for fascioliasis was 10 mg/kg body weight, while for paragonimiasis it was 20 mg/kg, given in two equal doses. The drug was well tolerated, with the only side effect in the treatment of Fasciola hepatica infection being a transient biliary obstruction due to dying worms.

According to a WHO sponsored independent review of all the data from the clinical trials, "the clinical studies conducted thus far indicate that triclabendazole is highly efficacious in treating human infections of Fasciola hepatica and Paragonimus species, and that its use has not been associated with serious adverse events".

The availability of triclabendazole makes national and/or regional control programmes feasible, as the drug is a safe, single dose, oral preparation. It is envisioned that in those areas where there is significant morbidity due to fascioliasis and intense transmission is taking place, such as the Andean plateau, Egypt, northern Iran and Cuba, programmes will be undertaken in the near future with chemotherapy as a major operational component. Treatment provides immediate relief to infected individuals and on a population basis reduces the prevalence and intensity of infection, thus potentially reducing the spread of parasite eggs in the environment.

All WHO Press Releases, Fact Sheets and Features as well as other information on this subject can be obtained on Internet on the WHO home page http://www.who.int/.