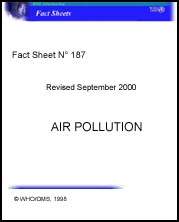 AIR POLLUTION (including WHO's 1999 Guidelines for Air Pollution Control)

Air pollution, both indoors and outdoors, is a major environmental health problem affecting developed and developing counties alike. It comes from sources of dust, gases and smoke, and is generated mainly by human activities but also naturally. When inhaled, air pollutants affect the lung and respiratory tract but can also be taken up and transported by the blood stream throughout the body. Through deposition in the environment, air pollutants can also contaminate food and water.

· An estimated 3 million people die each year because of air pollution (see Figures for breakdown); this figure represents about 5% of the total 55 million deaths that occur annually in the world. It is possible, because of uncertainty in the estimates, that the actual death toll is anywhere between 1.4 and 6 million annually.

· Many studies consistently show the direct link between mortality rates and daily ambient concentrations of suspended particulate matter that have diameters below 10 m m. Life expectancy can be significantly reduced in communities with high levels of particulate matter.

· Indoor air exposure to suspended particulate matter increases the risk of acute respiratory infections, one of the leading causes of infant and child mortality in developing countries. In Asia, such exposure accounts for between half and one million excess deaths every year. In sub-Saharan Africa the estimate is 300,000-500,000 excess deaths.

· Around 30-40% of cases of asthma and 20-30% of all respiratory diseases may be linked to air pollution in some populations.

· Studies in SPaulo, Brazil, have shown that a 75 µg/m³ increase in concentrations of nitrogen dioxide (NO2) was related to a 30% increase in deaths from respiratory illness in children under five years of age.

· In adult non-smokers chronic exposure to environmental tobacco smoke increases mortality from lung cancer by between 20% and 30%.

The effects of air pollution depend on levels of exposure and susceptibility of the exposed population. People suffering from respiratory conditions such as asthma, both the very young and old, and people living in poverty, are particularly at risk.

Air pollution also affects the workforce, and indoor air pollution is the primary cause in as many as 50 million cases of occupational chronic respiratory disease each year - a third of all occupational illnesses. These are widespread, debilitating and affect people in their social and economic prime of life. They are preventable with a minimum of resources.

The common picture of air pollution is of smoking industrial chimneys and traffic exhausts affecting the surrounding populations - ambient air pollution. Even though the main sources of air pollutants are man-made - traffic and industry - natural sources also contribute (e.g. volcanoes).

Indoor air pollutants are an even greater threat to the health of millions. In developing countries, the domestic use of coal and biomass materials as fuel for heating and cooking is a major source of indoor pollution. The greatest threat in this case is to women and children living in poverty.

Air pollutants are classified as suspended particulate matter, gases and vapours that are present in the atmosphere in abnormally high concentrations.

· The main components of suspended particulate matter are coarse particles such as soil and mineral ash or fine particles found in wood smoke or coming from engine exhausts.

· Other air pollutants include chlorinated fluorocarbons (CFCs) and other "greenhouse" gases, lead and other heavy metals and radon.

Without proper controls, industry is a major source of air pollution. In this way, industrial operations can affect the health of workforces, the general environment and the health of nearby (and sometimes very far removed) populations.

Some 2000 million people throughout the world use wood or other biomass fuels (cow dung, crop residues and grass) for cooking and heating. The domestic burning of these fuels is an inefficient process that produces many pollutants, some of which may be carcinogenic. The problems are worsened in areas where people spend most of their time indoors.

· A 20% reduction in indoor air pollution could reduce mortality from acute respiratory infection by at least 4-8% in some populations.

Coal burning for heating and cooking in developing countries results in indoor particle concentrations of up to 10,000 µg/m³, a level that is much higher even than ambient concentrations in polluted cities in Asia.

Air pollution has long been associated with industrial processes and energy generation. Pollution control followed the European Industrial Revolution and increased in importance after World War II with economic expansion. Various steps have been taken to prevent the destruction of the environment and the removal or at least minimizing hazards to human health.

WHO has produced the WHO Air Quality Guidelines. They are available from WHO or on the web site at: www.who.int/peh/air/airindex. The Guidelines provide background information which enables countries to set their national or regional air quality standards in the context of existing environmental, social, economic and cultural conditions.

WHO Guidelines values (1999) for common pollutants

Application of the WHO Air Quality Guidelines should help significantly to reduce the burden of excess mortality and preventable disability from a highly preventable source of ill-health.

For more than 20 years the WHO with the UN Environmental Programme (UNEP) assessed trends in ambient air pollution until this programme was replaced by the Air Management Information System (AMIS). Under the umbrella of WHO's Healthy Cities Programme, AMIS provides a means of actively sharing information between its members through a set of user-friendly databases. It is planned as a component of WHO's Global Air Quality Partnership, which brings together:

· UN agencies and programmes (e.g. WHO, UNEP and the UN Development Programme) as well as the World Bank and Regional Banks

· national aid agencies (including those of Australia, Canada, Japan, Nordic countries and the USA)

· national Environmental Protection Agencies (including those of Canada, China, Germany, Japan and the USA)

· individual cities (a target of 300 has been set), such as Beijing, Bombay, Chicago, Jakarta, London, Manila, Mexico City and Santiago, and

· other bodies such as nongovernmental organizations and the OECD

· Data on air pollution in cities are routinely collected and shared.

Further information can be obtained from the web site of the responsible WHO programme at: http://www.who.int/peh/.