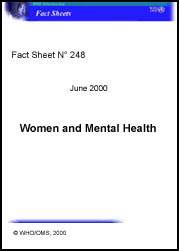 In investigating common mental, behavioural and social problems in the community we find that women are more likely than men to be adversely affected by specific mental disorders, the most common being: anxiety related disorders and depression; the effects of domestic violence; the effects of sexual violence; and escalating rates of substance use.

It is essential to recognise how the socio-cultural, economic, legal, infrastructural and environmental factors that affect women’s mental health are configured in each country or community setting. A gender-based, social model of health needs to be adopted to investigate critical determinants of women’s mental health with the overall objective of contributing to improved, more effective promotion of women’s mental health. Risk factors for mental disorder as well as for good mental health need to be addressed and where possible, a clear distinction should be made between the opportunities that exist for individual action and individual behaviour change and those that are dependent on factors outside the control of the individual woman.

To help clarify the meaning women themselves ascribe to mental health and various forms of psychological distress, findings from qualitative research need to augment those from quantitative research. Descriptions of life situations, case studies and direct quotes from women themselves can vivify the contexts in which emotional distress, depression, anxiety and other psychological disorders occur. Such first hand accounts of the experiences of poverty, inequality and violence will assist in developing a more accurate understanding of the structural barriers women face in attempting to exercise control over the determinants of their mental health and in effecting behavioural change. Both are needed to better inform the promotion of women’s mental health.

Women’s views and the meanings they attach to their experiences have to be heeded by researchers, health care providers and policy makers. Without them, research and the evidence it gathers, service delivery and policy formation, will be hampered in responding to women’s identified health priorities, problems and needs. Moreover, all three will be ignorant of the nature and magnitude of unmet needs and unaware of the factors influencing women’s utilisation of health care.

The identification and modification of the social factors that influence women’s mental health holds out the possibility of primary prevention of certain mental disorders.