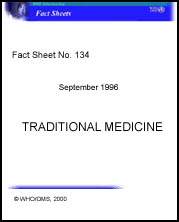 · The term "traditional medicine" refers to ways of protecting and restoring health that existed before the arrival of modern medicine. As the term implies, these approaches to health belong to the traditions of each country, and have been handed down from generation to generation. Traditional systems in general have had to meet the needs of the local communities for many centuries. China and India, for example, have developed very sophisticated systems such as acupuncture and ayurvedic medicine. In practice, the term "traditional medicine" refers to the following components: acupuncture, traditional birth attendants, mental healers and herbal medicine.

· Over the years, the World Health Assembly has adopted a number of resolutions drawing attention to the fact that most of the populations in various developing countries around the world depends on traditional medicine for primary health care, that the work force represented by practitioners of traditional medicine is a potentially important resource for the delivery of health care and that medicinal plants are of great importance to the health of individuals and communities.

· A genuine interest in various traditional practices now exists among practitioners of modern medicine and growing numbers of practitioners of traditional, indigenous or alternative systems are beginning to accept and use some of the modern technology. This will help foster teamwork among all categories of health workers within the framework of primary health care. The reasons for the inclusion of traditional healers in primary health care are manifold: the healers know the sociocultural background of the people; they are highly respected and experienced in their work; economic considerations; the distances to be covered in some countries; the strength of traditional beliefs; the shortage of health professionals, particularly in rural areas, to name just a few.

· Traditional medicine has maintained its popularity in a number of Asian countries, such as China, India, Japan and Pakistan. In China, for example, traditional medicines (herbal preparations) account for 30% to 50% of the total medicinal consumption. In 1993, the total sales of herbal medicines amounted to more than US$ 2.5 billion. In Japan, from 1974 to 1989, there was a 15-fold increase in Kampoh ("Chinese method") medicinal preparations in comparison with only 2.6-fold increase in the sales of mainstream pharmaceutical products. The Japanese per capita consumption of herbal medicine appears to be the highest in the world.

· During the last decade, there has also been a growing interest in traditional and alternative systems of medicine in many developed countries. One-third of American adults have used alternative treatment and 60% of the public in the Netherlands and Belgium, and 74% in the United Kingdom are in favour of complementary medicine being available within the framework of the National Health Service. A survey among Member States of the European Union in 1991, identified about 1400 herbal drugs used in the European Economic Community.

· Medicinal plants are the oldest known health-care products. Their importance is still growing although it varies depending on the ethnological, medical and historical background of each country. Medicinal plants are also important for pharmacological research and drug development, not only when plant constituents are used directly as therapeutic agents, but also when they are used as basic materials for the synthesis of drugs or as models for pharmacologically active compounds.

· Legislative controls in respect of medicinal plants have not evolved around a structured control model. There are different ways in which countries define medicinal plants or herbs. As a result, different approaches have been adopted with regard to licensing, dispensing, manufacturing and trading in order to ensure the safety, quality, and efficacy of medicinal plant preparations.

· Herbal medicines are assuming greater importance in the primary health care of individuals and communities in many developing countries and there has been an increase in international trade in herbal medicines. However, in most countries the herbal medicines market is not adequately regulated, and the products are therefore unregistered and often not controlled by regulatory bodies. The establishment of regulation and registration procedures has become a major concern in both developed and developing countries.

· WHO has compiled a list of medicinal plants which are widely used in primary health care. In July 1996, a WHO scientific group involving 100 experts from various countries around the world adopted the list which includes 28 monographs of 28 medicinal plants originally prepared by the WHO Collaborating Centre for Traditional Medicine in Chicago, Illinois, United States of America.

All WHO press releases, Fact Sheets and Features can be obtained on Internet on the WHO home page http://www.who.ch/