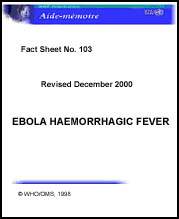 Ebola haemorrhagic fever (EHF) is one of the most virulent viral diseases known to humankind, causing death in 50-90% of all clinically ill cases. The disease has its origins in the jungles of Africa and Asia. Several different forms of Ebola virus have been identified and may be associated with other clinical expressions, on which further research is required.

· The Ebola virus is transmitted by direct contact with the blood, secretions, organs or semen of infected persons. Transmission through semen may occur up to seven weeks after clinical recovery, as with Marburg haemorrhagic fever.

· Transmission of the Ebola virus has also occurred by handling ill or dead infected chimpanzees, as was documented in Cd'Ivoire and Gabon.

· Health care workers have frequently been infected while attending patients. In the 1976 epidemic in Zaire, every Ebola case caused by contaminated syringes and needles died.

Symptoms: Ebola is often characterized by the sudden onset of fever, weakness, muscle pain, headache and sore throat. This is followed by vomiting, diarrhoea, rash, limited kidney and liver functions, and both internal and external bleeding.

Diagnosis: Commercially unavailable specialized laboratory tests on blood specimens detect specific antigens and/or genes of the virus, isolate the virus in cell culture or detect IgM and IgG antibodies. These tests present an extreme biohazard and are only conducted under maximum biological containment conditions.

· No specific treatment or vaccine exists for Ebola haemorrhagic fever.

· Experimental studies involving the use of hyper-immune sera on animals demonstrated no long-term protection against the disease after interruption of therapy.

· Suspected cases should be isolated from other patients and strict barrier nursing techniques practised.

· All hospital personnel should be briefed on the nature of the disease and its routes of transmission. Particular emphasis should be placed on ensuring that high-risk procedures such as the placing of intravenous lines and the handling of blood, secretions, catheters and suction devices are carried out under barrier nursing conditions. Hospital staff should have individual gowns, gloves and masks. Gloves and masks must not be reused unless disinfected.

· Patients who die from the disease should be promptly buried or cremated.

· As the primary mode of person-to-person transmission is contact with contaminated blood, secretions or body fluids, any person who has had close physical contact with patients should be kept under strict surveillance, i.e. body temperature checks twice a day, with immediate hospitalization and strict isolation recommended in case of temperatures above 38.3°C (101°F). Casual contacts should be placed on alert and asked to report any fever.

· Surveillance of suspected cases should continue for three weeks after the date of their last contact.

· Hospital personnel who come into close contact with patients or contaminated materials without barrier nursing attire must be considered exposed and put under close supervised surveillance.

· The natural reservoir of the Ebola virus seems to reside in the rain forests of Africa and Asia, but has not yet been identified. Different hypotheses have been developed to try to explain the origin of Ebola outbreaks. Initially, rodents were suspected, as is the case with Lassa fever whose reservoir is a wild rodent (Mastomys). Another hypothesis is that a plant virus may have caused the infection of vertebrates. Laboratory observation has shown that bats experimentally infected with Ebola do not die and this has raised speculation that these mammals may play a role in maintaining the virus in the tropical forest.