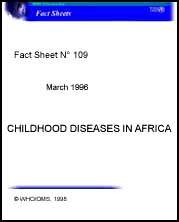 In the WHO African region, diarrhoeal diseases are still a leading cause of mortality and morbidity in children under five years of age. It is estimated that each child in the Region has five episodes of diarrhoea per year and that 800,000 die each year from diarrhoea and dehydration. Undernutrition and measles are very commonly associated with this mortality.

The prevention of diarrhoea ultimately depends on the improvement of water supplies and sanitation, which are very expensive but will eventually occur. The prevention of death from dehydration arising from diarrhoea is straightforward, using cheap oral rehydration salts or simple home-made fluids. The skills required by workers in health facilities and by mothers at home are easily learned. Standard case assessment and rehydration, promoted by WHO and UNICEF, has become a part of the training of almost every health worker in Africa.

Since 1992, the Region has been facing a severe epidemic of Shigella Dysentery. The bacteria causing this epidemic are rapidly developing resistance to the first line antibiotics normally used for treatment. The second line treatment is very expensive. In addition to killing children directly, dysentery is a common cause of persistent diarrhoea, which is responsible for 15% of deaths from diarrhoea in children. Cholera also continues to affect the region. Although the management of cases has improved greatly over the past five years, cholera remains a public health problem.

Starting in 1996, some countries will be using the WHO/UNICEF Integrated Management of Childhood Illness, which addresses the management of diarrhoea along with the other major causes of child mortality. This aims to reduce mortality further by ensuring that children receive coordinated treatment and preventive action for their needs. WHO will continue, in close collaboration with national programmes, its research and development efforts, looking for even more effective ways of tackling this problem.

Pneumonia remains one of the three most important killer diseases of children in Africa. It is estimated that of the 75 million children under five in Africa a million and a half die each year of pneumonia. At least two thirds of this pneumonia is caused by bacteria - particularly the pneumococcus and Haemophilus influenzae - and the great majority of these cases will respond to treatment with simple and cheap antibiotics given at home, following a treatment schedule developed and promoted by WHO. The successful management of acute respiratory infections (ARI) does not require an expensive, separate programme. The diagnosis and treatment can be given by suitably trained workers in first level health facilities, provided they are supplied with antibiotics. The management of severe cases calls for referral of the child to hospital where oxygen and second line antibiotics are available.

The countries of Africa have been actively developing the ARI components of their child care services over the past six years. There are now control activities in 28 countries, and a further seven have prepared plans of action in readiness to start training. Support has been provided by WHO and UNICEF and by several donors. More than 700 doctors and 4500 nurses have been trained in ARI case management. The effective management of pneumonia does need health workers and facilities, and the main stumbling block in Africa is the sparse health services in many countries of the Region.

The survival of a child with pneumonia depends to a great extent on the child being taken for care as soon as possible. The ARI plans of action of all the countries include education of communities and caretakers, both through the health workers and the mass media. WHO is assisting with surveys to produce ethnographic data to guide the development of community messages, and with training in the use of mass media.

ARI is one of the five conditions which account for more than 70% of child mortality in Africa. Four countries in the Region, Ethiopia, Tanzania, Uganda and Zambia, are now moving towards the introduction of the WHO approach to the integrated management of childhood illness, which covers ARI, diarrhoea, malaria, measles and malnutrition. It also takes the opportunity to ensure that children are fully immunized and given prophylactic vitamin A and that their mothers receive counselling on feeding. This approach, which other countries will follow in the next year, will ensure not only that children receive adequate care for their illnesses, including ARI, but that they are more likely to survive future attacks.

In 1993, some 90 countries or territories were considered malarious; almost half of them are situated in Africa south of the Sahara. It has been estimated that the incidence of malaria in the world may be in the order of 300-500 million clinical cases each year, with countries in tropical Africa accounting for more than 90%. Africa has the highest levels of endemicity in the world. Only about 7% of the population in the WHO African Region live in areas with no or a negligible risk of getting malaria.

The vast majority of malaria deaths occur among young children in Africa, especially in remote rural areas with poor access to health services. Approximately one million deaths among children under five years of age can be attributed to malaria alone or in combination with other diseases.

Mortality is concentrated in the younger age groups. Among children referred to hospitals with severe malaria, case-fatality rates of 10%-30% have been reported. In rural areas with little access to adequate treatment these rates might be even higher. Even in non-fatal cases malaria produces considerable impact on the health of young African children, increasing susceptibility to other infections and hampering development.

Hepatitis B is highly endemic in Africa south of the Sahara. Serological evidence of prior hepatitis B infection is present in 70%-90% of the population. The burden of the disease is enormous: mortality from primary cancer of the liver ranks either number one or two among cancer deaths in males in Africa. Primary cancer of the liver is 100% fatal and kills at an average age of 35-45 years, causing families to lose parents and wage earners at the most productive periods of their lives.

There are a number of reasons for the lack of hepatitis B vaccine integration:

· Many countries are dependent on donors for their vaccine supply.

· The cost of hepatitis B vaccine is higher compared to other childhood diseases vaccines.

· Routine coverage of other childhood diseases vaccines is low (30%-50%) in many African countries, and there is reluctance to add another vaccine to their national immunization programmes.

The WHO Regional Office for Africa has included introduction of hepatitis B vaccine into its Immunization Plan of Action calling for:

· introduction of universal hepatitis B immunization into childhood programmes of all Member States by 1997;

· attainment of at least 70% regional coverage of one-year old with three doses of hepatitis B vaccine by the year 2000.

Since 1988, when WHO Member States collectively undertook to eradicate poliomyelitis, the combined international effort has reduced the number of polio cases worldwide by 80%. Although over 140 countries were polio-free in 1995, WHO estimates that up to 100,000 new cases still occur each year in 67 polio endemic countries, mostly in Asia and Africa.

Polio-free zones are emerging in Southern, Northern and Eastern Africa. A special project “Six Steps to A Polio Free Africa” was launched by the WHO Regional Office for Africa in 1995. The six steps cover planning, coordination of all partners in the initiative, certification of polio-free areas, focus on least successful countries as well as full scale eradication activities.

Some of the major events in 1996 include the Kick Polio Out Of Africa initiative which will start in August, National Immunization Days and other activities planned in 28 countries. The aim of these campaigns is to interrupt the circulation of wild poliovirus. About 80 million children will be vaccinated against polio through these initiatives.

The partnership between WHO, Rotary International, UNICEF and the Centers for Disease Control and Prevention will help national governments to generate US$ 60 million a year for vaccine provision and operational support for National Immunization Days. Other United Nations agencies, donor governments and non-governmental organizations are also expected to contribute to this initiative.

WHO is convening a Committee for Polio Free Africa which will include current and former heads of state, First Ladies of several African countries and other prominent African leaders. This Committee will help to build the political commitment necessary in all the countries to conduct National Immunization Days for three consecutive years. Also, Rotary clubs of Africa backed by Rotary International, UNICEF and other partners will provide the vital social mobilization role at country level.

There is a 74% reduction of cases worldwide, from an estimated 95.5 million cases in the pre-immunization period to the current level of 34.3 million. An 85% reduction in measles deaths (from 5.3 to 1 million) has been achieved.

However, measles continues to be a tremendous burden through most of Africa. Countries of the WHO Regional Office for Africa achieved a 45% case reduction and 71% death reduction in 1995.

Six countries were successful in bringing down the number of measles deaths to five per cent as compared to pre-immunization figures. These countries are: Cape Verde, Malawi, Mauritius, Seychelles, St Helena, and Swaziland.

There is still much to be done regarding measles control in Africa. In countries where measles still take a heavy toll on childhood mortality, particularly in major urban centres, special acceleration of the programme through mass immunization campaigns should be undertaken.

In the African Region, neonatal tetanus (NT) remains an important public health problem, being responsible for 10%-30% of all infant deaths in many countries. The regional NT mortality rate is estimated at five to ten per 1000 live births resulting in 120,000 deaths annually. Nevertheless, progress has been made in several countries. In 1993-1994, 18 countries (Algeria, Benin, Botswana, Cape Verde, Comoros, Congo, Equatorial Guinea, Gabon, Gambia, Lesotho, Mauritius, Namibia, Rwanda, Seychelles, South Africa, Swaziland, Zambia and Zimbabwe) and two territories (Reunion and St Helena) representing 19% of the regional population reported national NT rates of less than one case per 1000 live births. Impressive decreases in NT incidence rates were also reported in Malawi (from 12/1000 live births in 1983 to 4.6/1000 live births in 1990) and in the cities of Abidjan, Addis Ababa, Harare, and Maputo.

However, even in countries with high national levels of protection by tetanus toxoid or clean deliveries, wide disparities exist in rural and urban areas.

The recommended “high risk approach”, using available data to identify populations at risk for neonatal tetanus and developing targeted and sustainable strategies in these areas, has been initiated only in three countries (Kenya, Swaziland and Tanzania) and in the capital cities of Nigeria and Zaire. Targeting women of childbearing age for tetanus toxoid immunization in these districts is cost-effective.

In other countries, particularly in Central, Western and Sahelian Africa, high risk populations are those dispersed in vast rural areas, and the current infrastructure and available resources are largely inadequate to reach them. Continued efforts are needed in all countries to strive for higher routine coverage with tetanus toxoid and to ensure clean birth techniques.