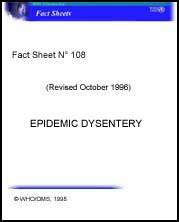 Dysentery may be simply defined as diarrhoea containing blood. Although several organisms can cause dysentery, Shigella are the most important. Shigella dysenteriae type 1 (Sd1), also known as the Shiga bacillus, is the most virulent of the four serogroups of Shigella. Sd1 is the only cause of epidemic dysentery. In addition to bloody diarrhoea, the illness caused by Sd1 often includes abdominal cramps, fever and rectal pain. Less frequent complications of infection with Sd1 include sepsis, seizures, renal failure and the haemolytic uraemic syndrome. Approximately 5-15% of Sd1 cases are fatal.

Sd1 has caused epidemics of dysentery throughout the world. It caused a 4-year epidemic in Central America beginning in 1968 that resulted in more than 500 000 cases and at least 20 000 deaths. No epidemics have occurred in the region since then, but Sd1 continues to occur sporadically in the Western hemisphere. In Africa, epidemic dysentery due to Sd1 appeared in eastern Zaire in 1979 and has subsequently been confirmed in Angola, Burundi, Equatorial Guinea, Ethiopia, Kenya, Malawi, Mozambique, Rwanda, Sao Tomnd Principe, South Africa, Swaziland, Tanzania, Uganda, Zambia, and Zimbabwe.

Few studies have been done to determine how dysentery is spread. The most likely modes of transmission are person-to-person contact, and contaminated water and food. Epidemics of Sd1 usually occur in impoverished areas. They affect people of all ages, with the highest age-specific incidence occurring among adults and the highest case fatality rates occurring among children.

A major obstacle to the control of Sd1 is its resistance to many antimicrobial drugs. In one central African country the bacillus was resistant to all oral antibiotics that were locally available. Furthermore, Sd1 can quickly develop resistance. Antibiotics are often effective against it for only one or two years after being introduced; resistance has even been observed to develop during the course of an epidemic. As resistance to commonly available antibiotics becomes more prevalent, alternative antibiotics are needed which are more expensive and more difficult to procure.

During an epidemic, all dysentery patients should receive an antibiotic to which Sd1 from local cases has been shown to be sensitive. Dehydration should be treated with oral rehydration salts or, if severe, with intravenous fluids. Urgent efforts should be made to obtain enough antimicrobials to treat all patients, but if in short supply they should be reserved for those at highest risk of secondary complications and death. These would include children under five years of age, adults older than 50 years, patients presenting with dehydration, and those with serious underlying conditions such as malnutrition. Patients should be identified as early as possible so that treatment can be initiated with a minimum of delay.

Early detection and notification of epidemic dysentery, especially among adults, allows for timely mobilization of resources needed for appropriate case management and control. National and peripheral-level laboratories should be strengthened so they can reliably confirm Sd1 as the cause of an outbreak. Rectal swabs from suspected cases should be collected and shipped refrigerated to laboratories in an appropriate medium for culture to confirm the diagnosis of Sd1.

Health education efforts should promote improved personal, domestic, and environmental hygiene. This includes hand washing with soap after defecation and before handling food, use of clean drinking water, safe practices for preparing and storing food, and safe disposal of faeces.

The publication AGuidelines for the control of epidemics due to Shigella dysenteriae type 1” is available from the Distribution and Sales Unit, of WHO.