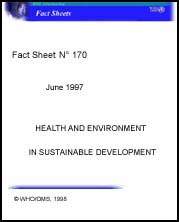 HEALTH AND ENVIRONMENT IN SUSTAINABLE DEVELOPMENT

* Since the Earth Summit in Rio de Janeiro in 1992, environment and health concerns have become an increasingly major item on the broad development agenda and environment issues have received more prominence in public health actions. There are some promising signs - not yet in terms of environmental improvement but rather in national development policies and infrastructure that address the problems.

* Environmental quality is an important direct and indirect determinant of human health; deteriorating environmental conditions are a major contributory factor to poor health and poor quality of life and hinder sustainable development; poor environmental quality is directly responsible for around 25% of all preventable ill-health in the world today, with diarrhoeal diseases and respiratory infections heading the list.

* Other diseases such as malaria, schistosomiasis and other vector-borne diseases, chronic respiratory diseases and childhood infections are also strongly influenced by adverse environmental conditions, as are injuries. The workplace is the most hazardous environment, with 125 million injured each year.

* As much as two-thirds of all preventable ill health due to environmental conditions occurs among children. Those affected the most are the impoverished populations living in rural and peri-urban areas.

* The number of urban poor is growing rapidly and it is estimated that in the year 2000 at least 1000 million people in urban areas will be counted among the poor. On the average, 50% of the urban population in developing countries live in conditions of extreme deprivation and the figure may be higher in some cities.

* Among the major contributory factors of ill health are lack of sanitation, poor water supply, poor food safety, air pollution (particularly indoor air quality in developing countries), and poor housing. For example, 2 900 million people were without adequate sanitation in 1994 and 1 100 million did not have access to safe water supplies.

* As many as 1000 million people, mostly women and children in developing countries, are exposed to high levels of indoor air pollution.

* An estimated 3 million premature deaths, mainly in acute and chronic respiratory infections, are now being attributed to exposure to air pollution on a world-wide basis; 2,8 million of these deaths are due to indoor air pollution exposures and 90% of these occur in developing countries.

* The occurrence of the major vector-borne diseases is closely related to naturally existing environmental conditions. In addition, the incidence, severity and distribution of vector-borne diseases are affected substantially by human activities such as water and agricultural developments and by urbanization.

* Malaria is a major health problem related to environmental conditions. Over 500 million people are affected by malaria in over 90 countries. The problem is increasing at least in part due to land degradation, deforestation, the expansion of agriculture and mining into new areas, and urbanization.

* Other major vector-borne diseases, each one affecting more than 10 million people and being particularly influenced by environmental conditions, such as water, sanitation and housing, include Lymphatic filariasis, Schistosomiasis, Leishmaniasis and Chagas disease.

The risk of chemicals

* Hazardous chemicals and various forms of hazardous waste, including health care waste, are of increasing concern to health and the environment. The lack of detailed quantitative information on the production and disposal of such waste, and the lack of information on the health risks severely hamper the efforts to control this problem.

* Thousands of new chemicals are developed each year and the assessment of their risks to health and the environment cannot keep pace.

* There is mounting evidence that human exposures and health risks of toxic chemicals such as lead, cadmium, mercury, DDT and PCB, have been brought under control in many developed countries, but generally not so in the developing world.

* Exposures of children to lead and persistent organic pollutants are of particular concern. Lead pollution has been reduced in a number of countries but is still a major concern in other parts of the world.

* The potential future impact on health of global climate change includes changes in patterns of distribution of infectious and vector-borne diseases, increases of heat-related illness, and injuries and disease due to sea level rise and extreme weather disasters.

* The increased UV radiation from the sun reaching the surface of the globe due to the damage of the stratospheric ozone layer is an important cause of eye cataracts and skin cancer.

* WHO's role as Task Manager of Health in relation to Agenda 21 involves ensuring collaboration in activities and programmes based on common policies and strategies for the United Nations System at the national, regional and global levels.

* Among promising changes, a major outcome of UNCED has been the agreement that countries should prepare and implement national plans for sustainable development. This has presented a challenge and an opportunity for the health and environment sectors and others whose activities affect health to ensure that related considerations are adequately dealt with.

* Supportive environments for health are being actively created in many regions of the world as part of Local Agenda 21 initiatives, like the Healthy Cities and the Healthy Villages Programmes.

* A number of countries, both developed and developing, have improved air quality management and reduced to acceptable levels airborne pollutants whose presence in the atmosphere can adversely affect human health, animal or plant life, the environment and materials of economic value.

* WHO has taken a number of initiatives in cooperation with other international organizations to assist in this process, including a major interregional initiative implemented jointly with UNDP to promote the incorporation of aspects affecting health and the environment in the preparation of national plans for sustainable development. The interregional initiative has served to increase awareness of issues affecting health and environment, has strengthened the role of the health sector in development planning, and has resulted in the preparation and adoption of firm plans for related action.

* At the time of the Earth Summit in 1992, the WHO Commission on Health and Environment presented an assessment of the relationship between health and environment in the context of development. Now, 5 years later, a reassessment has been made of the health and environment linkages and an analysis of this information in the context of sustainable development has been conducted. The result is a report entitled "Health and Environment in Sustainable Development".