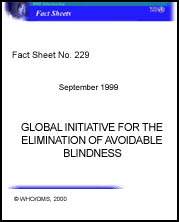 BLINDNESS IN THE WESTERN PACIFIC

With a total population of some 1.6 billion people, the Western Pacific region of the World Health Organization (WHO) accounts for an estimated 8 million blind people, or over 20% of the world's blind.

These estimates are conservative and have been arrived at on the basis of simple population assessment methodologies that were developed by WHO to assess the burden of blindness and identify its causes at country, regional and global levels. Standard low-cost field surveys, designed by WHO and conducted mainly by trained non-specialist staff, provided epidemiological data and helped create the WHO Global Data Bank on Blindness.

Of the estimated 8 million blind people in the region, more than 80% live in only three countries - China, Philippines and Viet Nam, with China accounting for almost two-thirds of the regional blindness.

In the countries covered by WHO's Western Pacific Region, prevalence rates of blindness range from 0.5% to just over 1%. Its causes vary from country to country, the most common being vitamin A deficiency in children, trauma in adolescents, as well as cataract, trachoma and glaucoma in adults.

Of all these causes of blindness, cataract has been recognized as a major blinding condition in the Region. It is responsible for over 50% of all cases of blindness, which is in line with the overall global trends.

Data on blindness is available from 7 countries in the Western Pacific Region of WHO. They include 5 developing and 2 developed countries: Cambodia, China, Laos, Philippines, Viet Nam as well as Australia and Japan.

In the developing countries, the estimated prevalence of blinding cataract ranges from 0.18% in China to 0.85% in Viet Nam, which is six and 10 times higher than the prevalence observed in Japan.

Because of the size of its population, which is ageing rapidly, China bears a major burden of unoperated cataract cases (more than 2 million). In Viet Nam, despite recent progress, the backlog is still over 500 000 cases.