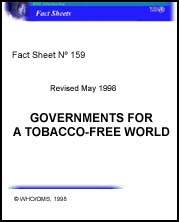 Governments for a Tobacco-Free World

Tobacco products have no safe level of consumption. They are the only legal consumer products that cause ill health and premature death when used exactly as the manufacturer intends.

Unless concerted action is taken quickly, 250 million of today's children will die prematurely from an avoidable cause - tobacco use. In many countries, the serious consequences of tobacco use are largely unknown.

Even where health education campaigns have been successful in informing the public and, particularly children, about the dangers of tobacco, this message is challenged at every opportunity, when the social, political and economic environment actually condones and even glamorizes the use of tobacco.

Tobacco control must come from all sectors, and it must be comprehensive in scope. The international health community has recognized that a partial solution to this major problem in not enough. The following, derived from the World Health Assembly resolutions, along with recommendations from other international and intergovernmental bodies, lists some key elements that should be included in comprehensive national tobacco control programmes.

1. Protection for children from becoming addicted to tobacco through such measures as the banning of sales to and advertising targeted at children.

2. Implementation of fiscal policies to discourage the use of tobacco, such as tobacco taxes that increase faster than the growth in prices and income.

3. Allocation of a portion of the money raised from tobacco taxes to finance other tobacco control and health promotion measures.

6. Elimination of socioeconomic, behavioural and other incentives which maintain and promote the use of tobacco.

7. Elimination of direct and indirect tobacco advertising, promotion and sponsorship.

9. Promotion of economic alternatives to tobacco growing and manufacturing.

Many of these elements extend beyond the domain of the health sector. Therefore, real progress in tobacco control cannot occur without the involvement of other sectors. It is not sufficient for tobacco control to be merely a top public health priority. It is, and must be seen, as a top public policy priority.

The Role of Governments

Tobacco control efforts are necessary at local, national, and international levels. Policies and programmes developed at all these levels serve to complement each other, and each plays an important part in bringing about a tobacco-free world. Even if legislation and regulations may not be feasible at this time at the federal level, it could, nevertheless, be possible for the municipal or state levels to pass strong legislation, which may then prompt the national government to take appropriate action.

In many cases, national programmes and policies have come about because of efforts begun at the local level, often initiated by grassroot organizations or committed individuals. These include providing protection from environmental tobacco smoke (ETS), enforcement of restrictions on sales of tobacco products to minors, provision of antismoking health education programmes, and provision of smoking cessation programmes or materials. Reducing the tobacco epidemic requires a comprehensive approach based on scientific evidence, including government, community and media action, health education, and legislative measures.

Very few countries around the world can claim to have taken sufficient intersectoral action on health promotion. In some countries, there is little communication between the health ministry and other sectors. The health ministry must be an energetic advocate of policies such as high tobacco taxes, and must encourage other departments to beware of the dangers of accepting highly attractive investment from transnational companies intent on exploiting new tobacco markets.

Governments have a central and crucial role in tobacco control. Without government commitment, tobacco control measures are much less likely to succeed. Government action has been remarkably uneven on tobacco control in marked contrast to the relatively constant effective public health response to such issues as immunization.

Much of the disease burden generated by smoking could be reduced by using existing effective strategies, such as taxation and advertising bans. Some governments may lack the incentive to control tobacco use because they have not been persuaded of its devastating impact, either on health or development, in their own economies. Thus, tobacco control advocates must ensure that government officials are informed and persuaded about the need for effective tobacco control policy.

In working to stem the tobacco epidemic, the lead government department is the Ministry of Health. However, virtually all departments of government play a role in tobacco control. Some of these have traditionally supported tobacco interests. Such ministries/departments include: Finance and the Treasury, Customs and Excise, Trade and Commerce, Consumer Affairs, Agriculture, External Affairs and International Trade, Law and Justice, Labour, Transport and Public Service, Education, Environment, Defence, Culture and Sports, and Religion. New opportunities exist for an approach that does not compromise tax revenues, tobacco farmers, tobacco workers, or trade. When all sectors of government, along with committed organizations and individuals work together for tobacco control, real change will occur, and the tobacco epidemic will be reversed.

It is startling to note that more disease and death have been generated by smoking SINCE the health consequences became known than in all the previous history of tobacco use. The long delay between smoking and the diseases it causes reduces the seriousness with which these issues are addressed. These doubts promote "denial" by smokers and even by many of those in charge of promoting and protecting public health. Tobacco companies add to this denial by offering false reassurances, denying the evident, and deliberately confusing large hazards like smoking with minor hazards in the public mind in order to continue to maximize their profits.

Governments have a central role in tobacco control. The most effective actions to reduce the tobacco epidemic are taken not in hospitals but in the halls of government.