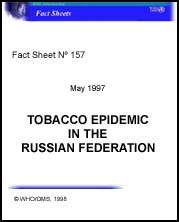 The dramatic economic and social changes that have occurred in Russia in a very short period of time against the background of an unprecedented economic crisis, have certainly affected the nation's health status.

Russia is experiencing an intense increase in the mortality rate and a reduction of life expectancy - summary indicators of the socioeconomic and health status of a society.

Like all other Former Socialist Economies (FSE), where the number of deaths due to tobacco use is increasing and projected to account for more than 22% of all deaths by 2020, the Russian Federation is being swept along by the tobacco epidemic.

* About two-thirds of Russian men and one-third of Russian women smoke.

* Smoking rates among adolescents are increasing, especially among girls.

* Today, 55% of all deaths in Russia are due to heart diseases, which are followed by cancers accounting for another 20%. Between 25% and 30% of both groups of diseases are caused by smoking.

* Tobacco causes about 280 000 deaths per year in the Russian Federation alone, 32% of all male deaths and 5% of all female deaths.

* One may judge the magnitude of the problem by the approximately 300 thousand million cigarettes that were manufactured or imported into Russia in 1995.

* Tobacco rationing in the early 1990s. In the early 1990's, because of shortages of raw tobacco, filter materials, and other supplies, there was a considerable gap between the demand and the production of tobacco products in the USSR and, especially, in the Russian Federation. The government then had to introduce tobacco rationing which led to "tobacco riots" with cars overturned and city roads blocked by angry smokers. This situation led to the opening of the Russian market to imported cigarettes, and massive amounts of tobacco advertising.

* Psychological distress on the Russian people imposed by dramatic economic and social changes which occurred in Russia in a very short period of time. Thirty four percent of Russians now live below the official poverty level. Despite scientific evidence to the contrary, there still prevails a false idea that smoking helps psychological distress.

* Attraction of the Western lifestyle associated with smoking and projected in imported, mostly old American, films and TV programmes which flooded Russia. Russian youth is especially attracted to this image which they perceive as "fashionable", or "high class".

* Easy access to cheap, low-quality tobacco products. Because of the lack of quality control over tobacco products and unprecedented smuggling, Russia was flooded with cheap cigarettes of dubious quality, with small or no health warnings at all.

* Lack of financial resources in the public health sector to counter the "tobacco assault". Serious financial constraints do not make it possible, for example, to produce high quality anti-tobacco materials. Anti-tobacco video clips produced at the request of the Russian Ministry of Health are shown on TV during the daytime when most people are at work or at school. In contrast, a tobacco company has recently provided the bulk of US$150 000 spent on just one advertising festival in Moscow.

* Breaking up of a centralized system for health promotion and of the previously developed intersectoral cooperation throughout the extensive territory of the Russian Federation.

Because of these and other reasons, Russia is becoming an increasingly lucrative market for cigarette manufacturers from Western Europe and the United States.

In order to slow the progress of the tobacco epidemic in the Russian Federation, concerted, purposeful action will be needed to implement comprehensive tobacco control measures, as recommended by the World Health Organization (WHO).